Rodrigo was born to parents Mary and Robert on Rockfort Island, which was one of the southernmost islands off the coast of South America. When he was just a boy, Umbrella purchased the island, destroying his village and supposedly killing all the inhabitants, including his parents.

With nowhere left to go, Rodrigo turned a blind eye towards these atrocities and accepted security work with the very group that had destroyed his home. Something of a loner, Rodrigo was trained at the new Military Training Facility on Rockfort in the nineties before being granted a job at the Paris branch. 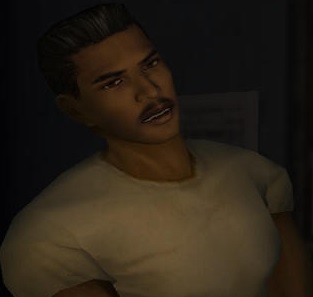 He was on duty the night of December 17th, 1998 and had his men on full alert following an intruder alarm. There he managed to capture Claire Redfield and later personally escorted her to Rockfort Island as a prisoner. Shortly after their arrival, Rodrigo was injured during the aerial attack by the rival company. He allowed Claire to escape as the island was thrown into chaos from the ensuing biological outbreak.

His reasoning for releasing Claire stemmed from his growing disgust with Umbrella, and with himself for working for them in the first place, an action that tarnished him with guilt for most of his life. He no longer cared about Umbrella’s fate, or even his own. The wound he received during the attack was easily healed when Claire brought him some haemostatic medicine, and she also left him her lighter, a gift from her brother, Chris. But although healed physically, the wound inside Rodrigo’s soul was not so easily remedied. Filled with regrets, he went down to the underground cemetery to be reunited with his family. However, he was attacked and swallowed by the Gulp Worm that suddenly appeared out of the ground. Although Chris Redfield managed to come to his aid, he was a little too late and his injuries too severe. He gave Chris back his lighter and said that if Claire was still alive she was hopefully off the island by now. Chris left and Rodrigo died peacefully, surrounded by his beloved family.