Although little is known about Davis’ early life, it is believed he graduated into the political scene at an early age, eventually rising up to become the elected senator for the town of Harvardville in the mid-western United States. He was an overweight, bald, little man with an angry personality and no tolerance for those he viewed as beneath him. At some point, he allied himself with WilPharma Corporation, a pharmaceutical enterprise and member of the Global Pharmaceutical Consortium. He served as a special advisor to the company and was one of their biggest stockholders, which often led to him being accused of suspected insider trading by the media.

Davis had good relations with the President of the United States and was not afraid to speak his mind. He was also part of the Senate special committee that proposed the plan to sterilise Raccoon City alongside Derek Simmons. Davis voted in favour of the operation to help cover up evidence of collusion between Umbrella and the U.S. Government and gain himself more favour inside the inner circle of the United States’ political hierarchy. 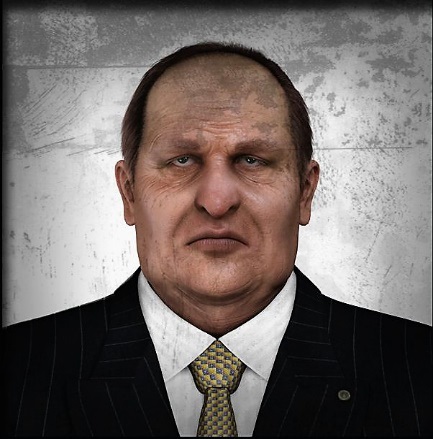 However, Davis also had an ulterior motive because once Umbrella had been dissolved, WilPharma would take their place as the world’s leading pharmaceutical company, ensuring that their stock value would rise exponentially. He used his connections to ensure the U.S. Government became favourable with WilPharma which led to a secret agreement allowing WilPharma to conduct clinical trials in India in order to research a t-Virus vaccine. He managed to persuade the naturally cautious new government administration that the work being carried out was a ‘necessary evil.’

In 2002, Davis used his powerful influence in Washington to gain approval for WilPharma to construct a state of the art research facility in Harvardville, appeasing the local populace to boost the economy and create job opportunities for the town. Within three years, the new facility was completed and the t-Virus vaccine finalised and awaiting federal approval. This won the company even more favour with the government and the value of their stocks went through the roof. A public announcement of an approved vaccine to the world’s most deadly bioweapon promised to win WilPharma public support the world over and Ron Davis stood waiting to take all the plaudits.

However, TerraSave, an NGO protesting against WilPharma, published photographs of the company’s secret clinical trials in India on the homepage of their website. This led to WilPharma stock decreasing with the public starting to believe the corporation to be just as bad as Umbrella following these inhumane and illegal human experiments. Ron Davis attempted to deflect this criticism by hosting a National Pharmaceutical Conference in Harvardville as soon as possible. However, his world was turned upside down on November 12th 2005 when he arrived at Harvardville airport for the conference amid a huge protest aimed at him and WilPharma by Terrasave. Davis had also worked closely with WilPharma chief researcher Frederic Downing but was unaware of his corrupt side or what he was planning, and so he was just as surprised as anyone when the terrorist attack contaminated Harvardville airport with the t-Virus.

Amidst the ensuing chaos, Davis found himself trapped with several survivors, including Claire Redfield, in one of the airport VIP lounges. He was later rescued by Leon Kennedy and members of the Special Response Team although he put 8-year old girl Rani Chawla in deliberate harm’s way in order to ensure that he escaped from the doomed airport first. Davis revelled in the aftermath, quite happy to place the blame on Claire and TerraSave for the delay in arrival of the t-Virus vaccine, meaning lives were lost that WilPharma essentially could have saved given the chance. But he remained ignorant as to what was really going on.

Following the incident at the aerodrome facility, Claire directly accused Davis of being in league with the terrorists to ensure that WilPharma came out of the incident looking like heroes. But this was inaccurate for as cold and selfish as Davis was, he would never revert to terrorism to ensure WilPharma did not end up like Umbrella. However, in the weeks afterward, WilPharma and Davis continued to be hounded by TerraSave and the incident destroyed the public’s faith in the company. Once again the old allegations of his insider trading with the company began to surface and Davis found his position untenable and announced his resignation.

WilPharma was later bought out by Tricell Inc. and shortly after the takeover was announced, Davis was mysteriously found dead in his office, believed to have been murdered by a Tricell agent and made to look like suicide. After that, all data relating to Tricell and WilPharma was deleted from Davis’ personal computer.