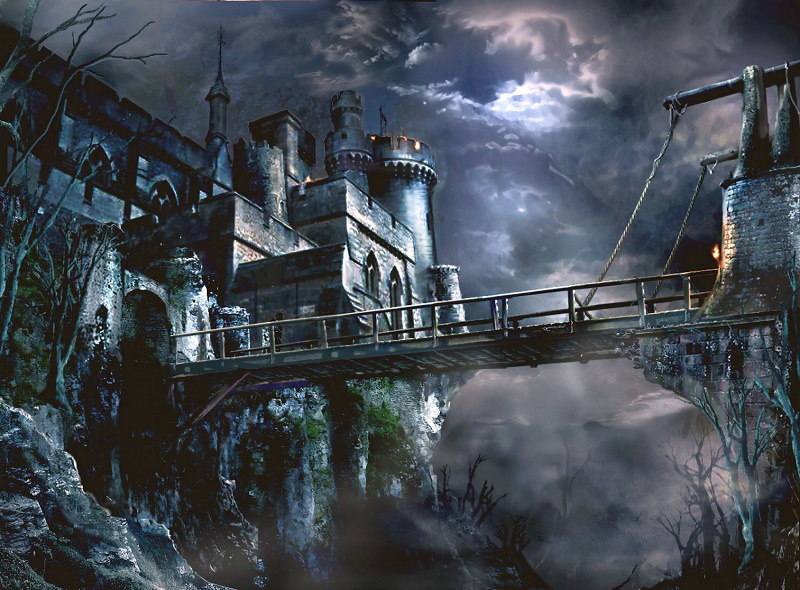 Salazar castle was a large, ancestral fortification standing hundreds of years old. It was located in rural Southern Europe in a mountainous region overlooking acres of undying farmland and a small village settlement. Approximately 200 years ago it was taken over by the feudal Salazar family. The first Castellan wasa good man and taught paganism across the region. He helped the local peasants by driving away a dangerous occult organisation calling themselves the Los Illuminados. Their power came in the form of a strange parasite that had the ability to take over and control a human host. The first Castellan and his knights banished the Los Illuminados and the parasites were sealed away in the caves below the castle foundations where they would slowly expire.

The castle remained in the care of the Salazar family ever since up until the current and 8th Castellan, Ramon Salazar. Even in the 21st century in which sovereign rulers were all but extinct, his was the one family that continued to hold de facto power over a large and fertile region. Some even referred to Ramon as the king of the land and from the time they were born, the villagers had no choice but to declare their loyalty to the Salazar family. Unless they made a decision to never return to their hometown again, there was no escaping the age-old convention of being tied to the land. In return for this right of holding a high stature, and ruling/financial power, the Salazar Castellans were responsible for protecting the people. They were obligated to use force to fight off outside attacking enemies, to fairly judge crimes within the land, to treat the citizens well and lead them to peaceful lives.

In the most ideal case, they should firmly deny their own status as rulers continuing to live in the old ways because such responsibilities were being managed by the national government in modern days. But because the Salazar’s refused to relinquish such power, some viewed the family as nothing more than parasites sucking the blood from the poor.

In the past, the Salazar family sealed away the Plaga and fought against the dark cult of Los Illuminados who worshiped this power. While people were enticed by Osmund Saddler’s charming charisma, the contemporary Ramon did the forbidden and released the Plaga, exposing the innocent villagers to become living sacrifices.

The castle became a primary headquarters for the Los Illuminados and soon its grand halls were infested with cult members and cowl-wearing acolytes.
The castle was well-fortified and set atop a large cliff which overlooked the village far below. Access could only be gained via a drawbridge that could only be lowered by two people simultaneously. The battlements were laced with giant catapult machines for aerial bombardments and there were many guard-posts and bastions set within the weathered stone brick of the ancient fortress. The outside barracks housed a puzzle in which a golden sword and a platinum sword needed to be switched around to reveal a hidden door. The Castle Gate key was required to access the main interior entrance which led to the audience hall. This was where Salazar would address his visitors and the place was illuminated by candles, lanterns and flaming torches. Access to the inner sanctum of the castle could be gained from here but it was locked via a trick puzzle that required three pieces of a chimera emblem split into a serpent, lion and goat ornament. This was the main security mechanism.

The main castle interior was exquisitely designed with many fine rooms lavishly decorated and full of treasures and antiques. Grand rooms such as the Hall
of Water revealed magnificent stone architecture and the inner palace contained great works of art and fine frescoes and paintings including works by Raphael and Paulo Uccello. But despite its appeal, the castle was a dangerous place and laced with traps to deal with intruders. It also housed a prison where the Garradors were kept and a large sewer network which was infested with Novistadors. Near to Salazar’s private chambers was an elaborate garden and a meticulously designed hedge-maze. Here various pens contained Colmillos guard dogs protecting two parts of a moonstone needed to unlock the main door. The expansive courtyards were protected by high perimeter walls and an old village settlement was once housed within the castle grounds leading to a large looming tower in the background. This is where the excavated and revived Plaga Queen was kept.

Beneath the castle was an expansive mine network in which Salazar employed villagers to excavate the fossilised Plagas first banished here by his ancestor. There was also an ancient burial ground and tunnels and remnants of an ancient settlement with scripture and drawings left behind on the cavern walls. The castle estate was so big that a private monorail was installed so Salazar and his minions could reach each area quicker. Following Salazar’s death in the 2004 South Europe Incident, the castle was left abandoned and is now nothing more than a relic full of haunted memories.