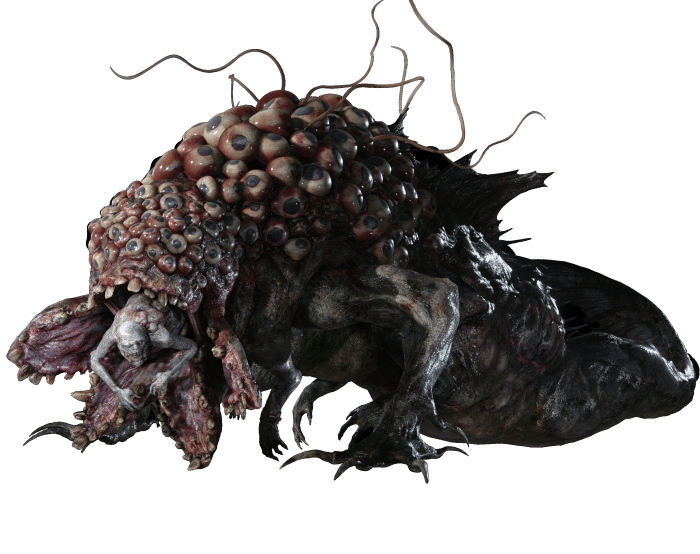 Salvatore Moreau was one of the 4 Lords that successfully bonded with the Cadou parasite from Miranda. Due to this, Moreau was given access to the parasite and test subjects to help fulfil her goal of restoring her deceased daughter.

Moreau himself adored Miranda and worked tirelessly to impress her. This probably stemmed from the fact that his bond with the Cadou was significantly different to that of the other Lords. Whilst Heinseberg, Alcina and Donna all retained their humanity, Moreau underwent a different, wetter mutation. It was noted by Miranda that his affinity with the Cadou and his brain intellect were lower than normal upon administration. However, unlike other subjects who shared similar traits, he did not become a Lycan – instead mutated into an aquatic monster.

During the Village incident in February 2021, Moreau was tasked with keeping safe a flask containing Rose Winters. When her father arrived to take the flask, Moreau trapped Ethan in by his lake home area. With the area largely flooded, Moreau believed he would have the upper hand and stalked Ethan as he navigated himself towards the sluice.

Moreau remained underwater and was able to launch himself at Ethan, however his efforts were in vein. After releasing the water from the dam, Moreau confronted Ethan once more where on land, the odds were reversed.

Mutated Moreau was the result of the Cadou fully embracing its host. It’s tentacles are seen erupting from his back that now resembles a sea slug with arms. His manoeuvrability was significantly compromised, but was made up by being highly durable and a devastating acid that could rain down on attackers. The only real weak point was the remnants of Salvatore that was attached to the creature’s mouth. This mutation was very similar to that of Ramon Salazar and Ricardo Irving.

Moreau was eventually defeated by Ethan Winters in February 2021 after sustaining heavy and concentrated firepower in the submerged village.