The Samurai Edge A1 Story is a piece of supplementary lore from Tokyo Marui tha was included with the replica handgun from Biohazard Revelations.

Tokyo Marui have been regular collaborators with Capcom in the release of replica handguns and other weapons from the franchise. In some cases this includes additional background information regarding the weapon and its users. These stories are written by the Capcom development team.

This information has been translated by REP staff member, theBatman. 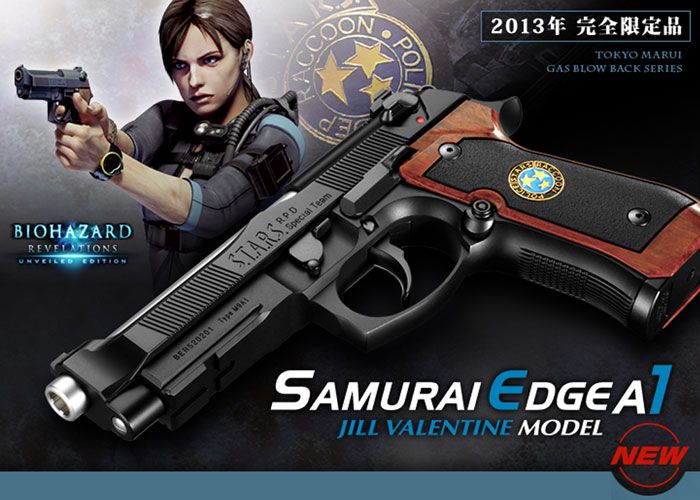 Jill Valentine with ‘Samurai Edge’ = B.S.A.A. Affiliation
Jill Valentine is a well-known former member of STARS, and now currently belongs to the BSAA. She is one of the ‘Original 11’, a founding member of the BSAA, which started out as an NGO. She remains an enrolled and active member even after the BSAA became a unit under the jurisdiction of the United Nations.

In 2004, the Federation of Pharmaceutical Companies, a trade association of pharmaceutical companies from around the around, established the B.S.A.A. (Bioterrorism Security Assessment Alliance) to fend off the pressure of criticism caused through use of B.O.W.s (Bio-Organic Weapons), for terrorism. These are viral weapons released after the collapse of Umbrella, a former Federation member. The BSAA is a private non-governmental organisation with the objective of countering bioterrorism. Due to its establishment and purpose of action, it was essential to procure various equipment, including weapons.

The existence of PMCs (Private Military Companies) shows that with the necessary funds, procedures and a few connections, many weapons can be procured even by private groups. The BSAA started procurement with the backing of the Federation of Pharmaceutical Companies, but there was one person who was looking beyond that. This was Quint Cetcham, who joined the BSAA both as an agent and a technician.

Although he did not have a lot of field experience, his extensive experience in receiving, analysing, developing, and providing feedback led him to anticipate that sooner or later there would be a demand for dedicated equipment, and he stressed the need for continuous data collection and research. This claim was approved by Clive R. O’Brian, the first head of the BSAA, and the “Anti-Bioterrorism Armament Research Project” was launched.

As the name ‘research’ suggests, the primary focus of this project was not on the development of specialised equipment, but rather on research and accumulation of results. This is said to be due to the fact the BSAA was still a relatively small organisation at the time of its inception, and because there was both legal and practical problems with a private NGO developing weapons, even for the purpose of counter-bioterrorism.

These circumstances are how the project started, but Quint himself was enthusiastic. He decided to start by studying the equipment used by various anti-bioterrorist organisations. At the time, the United States’ ‘FBC’ was the most recognised anti-bioterrorism organisation, but it was also notoriously secretive, and it was impossible to obtain any useful information about its equipment. Needless to say, Quint and the rest of the BSAA had no way of knowing about the existence of the FBC’s <Sentinel> project to develop specialised anti-bioterrorism equipment. There were several other organisations that were working to combat bioterrorism, but all of them were mainly still using pre-existing equipment, and therefore none had special equipment that could be the subject of research.

The next area of focus was the study of previous bioterrorism cases. The idea was to study what equipment had been used at bioterrorism incident sites and how it had helped to bring the situation under control.

Amongst those that caught Quint’s eye was the Samurai Edge, an M92F-based handgun that had been customized and used by S.T.A.R.S., a special unit within the Raccoon City Police Department. Although S.T.A.R.S. was not formed specifically to fight bio-terrorism, it is said to be one of the organizations that were deeply involved in the tragedy of Raccoon City’s annihilation that began with the mansion incident. It was also convenient that Jill Valentine and Chris Redfield, two of the key figures in the BSAA, were part of it.

Quint immediately contacted Jill and borrowed her personal Samurai Edge for research and verification. As a result, he concluded that the Samurai Edge’s high accuracy and ease of use would be effective not only in peacetime but also in the field of bioterrorism.

Quint was also intrigued by the fact that the Samurai Edge was not a specially designed model but had been customised to achieve this level of performance. Therefore, Quint decided to change the base to an M9A1 as a test model and started reproducing the Samurai Edge. Following conclusion of all the analysis, including data accumulation from trial firings, the gun was offered to its original owner, Jill, who was working on the front lines of bioterrorism.

At that time, the grip medallion, the <S.T.A.R.S. R.P.D Special Team> and <CUSTOM SHOP Kendo > engravings were added to the slide, none of which were present during data collection.

This was Quint’s playfulness and an episode that really reflected the organisational atmosphere of the early B.S.A.A.