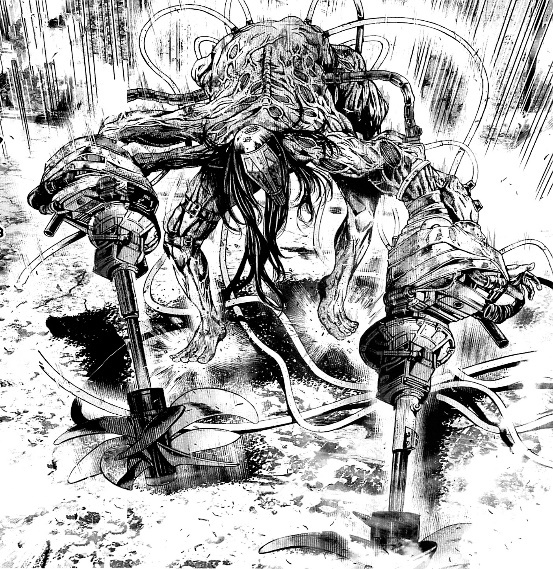 The Schraube Dämon is what became of a human test subject known only as Lopez. Lopez was a resident of Ague Village on Sonido de Tortuga Island in the Caribbean Sea. He showed an attraction to a girl named Marilou Mabou and through their respective families an arranged marriage was planned. But Marilou was much younger than Lopez and frightened by the idea, causing her older brother Eliseo to step in and protect her. Lopez and Eliseo often clashed until one day Lopez suddenly vanished and was never seen again. Lopez had fallen under the sway of a mysterious Shaman that had suddenly appeared on the island in 2006. He was brought down to a hidden research facility beneath an abandoned military base and initiated into the Kodoku Plan; an R&D project originally begun by former Umbrella researchers Alex Wesker and Dirk Miller to create the perfect B.O.W. based upon Charles Darwin’s ‘Survival of the Fittest’ ideology.

The project was originally funded by Oswell E. Spencer who was looking to unlock the secrets behind immortality, but Wesker eventually left Sonido de Tortuga as part of her pre-planned betrayal of Spencer and took all of his resources to Sushestvovanie Island where she had been setting up her own operations in secret for a number of years. The project was left in the hands of the remaining research team and Wesker left behind orders for them to apply to Kodoku principle to themselves, removing them one by one until only the ultimate survivor remained. The victor would gain her complete trust and that person was Miller. But without the assistance of the other researchers and Spencer’s backing, Miller was forced to improvise to procure further guinea pigs, which in turn led to his sudden appearance as The Shaman. Under this guise, he was able to take control of the islanders.

Lopez was one such subject and was brought down to the research facility in isolation. He was one of a large group of men placed into a secure room and made to fight to the death. This was one of a number of tests and the guinea pigs were made to fight under various conditions. The idea behind the project was to create the most powerful virus from the sole survivor. Lopez was in excellent physical shape and demonstrated superb fighting skills. He was the ultimate victor and soon stood in a room surrounded by his fallen compatriots. He was isolated and experimented on further, with samples of his blood extracted and combined with the experimental virus originally developed by Wesker. Further tests ravaged his body and he underwent strengthening surgeries and was grafted with an additional two arms. He was suspended in a tank of bio-organic fluid and programmed to target the most powerful fighters. As a directive to keep the island itself as the ‘Kodoku Pot, it was also imprinted on Lopez that no one be allowed to leave the island. In later years two motorised boat propellers were surgically attached to his arms and his body was laced with electrical wiring and a portable battery to power them. The combined weight of the propellers coupled with his increased size and bulk thanks to an abnormal secretion of growth hormone caused the creature to develop a hunched back. It retained Lopez’ long, black hair but its face was concealed by a tribal mask. Miller named this B.O.W. the Schraube Dämon which literally translates to ‘Screw Damon.’

It would be set loose periodically to deal with its rivals in the Kodoku Project but when inert was left in slumber in the temple ruins, hooked up to computers for data download. Miller had perfected a technique to activate the Dämon by way of a special keyword he imprinted into its brain patterns. At the time researchers from many differing organisations were looking at new and improved ways to control B.O.W.s to make them more marketable. These methods ranged from primitive arena training, to individual handlers, organic parasites, control chips and now subliminal programming. But the fact B.O.W.s could now be activated by simple codes and keywords was something the likes of the B.S.A.A. and TerraSave tried to cover up as part of their ongoing quest to prove that B.O.W.s could not be controlled and needed to be eradicated. Miller’s key word for the Schraube Dämon was ‘wife’. This was in relation to Lopez and his desired partnership with Marilou Mabou. As soon as the Dämon heard this keyword, it would immediately activate and go on the rampage. Its combat abilities were phenomenal. It was capable of tactical thinking and was intelligent enough to use its propellers as a moving shield to protect its body from gunfire. It also had the ability to detach and fire off its propellers as a projectile. It could then replace any missing attachment with other specially designed weapons such as a rock drill. It also had astonishing agility and jumping prowess, and was capable of leaping up high enough to bring down an airborne helicopter.

By 2014, the Schraube Dämon was one of only two remaining subjects in the Kodoku Plan. It was kept in slumber in the ruins of the old temple, a sacred place The Shaman had taken as his shrine to ward away intruders. Throughout the years Tortuga Island had been raided by several groups looking to find Umbrella Corporation’s hidden legacy without success and yet rumours had spread to the underworld about a powerful B.O.W. residing there. This ensured the Dämon was a target for Chinese conglomerate Shen-Ya Pharmaceuticals who hired a spy named Mike Seaman to steal it as a cheap, but effective B.O.W. to showcase to terrorists. But it was eventually set loose by Miller and murdered Seaman. It later attacked a B.S.A.A. support team and eventually clashed with Subject 001193; the other finalist of the Kodoku Plan and Marilou’s former brother and Lopez’ rival, Eliseo. Miller believed the Schraube Dämon would be the ultimate victor of the Kodoku Plan but it was finally defeated in mortal combat by 001193.