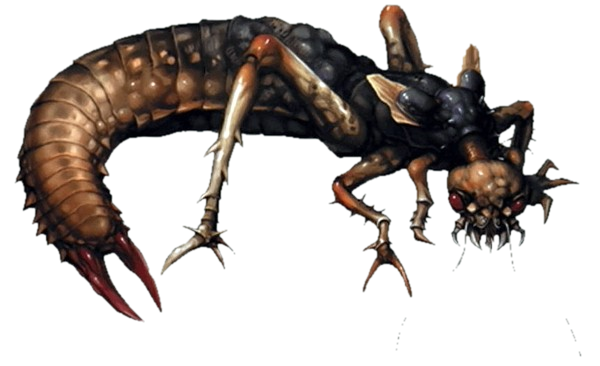 The Scissor Tail was originally a common earwig among many creatures secondarily exposed to the t-Virus as it slowly consumed the areas in and around Raccoon City. Like most insects, the t-Virus caused rapid growth leading the earwigs to develop up to ten times their original size or in this case, over one meter in length. But this enlarged body mass did not include their wings, rendering them useless because the increased weight of the Scissor Tail meant it could no longer fly. Its movements were also slow and it preferred to lie in wait on the forest floor or in damp and dark places, waiting for potential prey to walk by.

Other effects included an unnatural increase in aggression, so much so that these normally omnivorous insects became primarily carnivorous. This was a direct result of the intense appetite brought on by the virus and could also explain why some Scissor Tails were also recorded in the very centre of Raccoon City as they went hunting for a fresh and regular food source. Its primary attack was from sharpened pincers at the back of its tail which was also how these creatures were given its name. It utilised its pincers in much the same way a scorpion used its stinger. If their prey got too close, the Scissor Tail would tackle them to the floor and bite repeatedly. Sometimes it would intentionally leave their targets bleeding profusely, making them easier to track. Some moderate intelligence was recorded and if the Scissor Tail sensed it was in danger, it would quickly burrow underground to get out of sight. There were two types of Scissor Tail recorded during the Raccoon incident. The first was the standard brown variant and the second was slightly smaller and blue in colour. This blue Scissor Tail had the ability to secrete a potentially lethal poisonous toxin from its pincers.