Wilson (first name unknown) was a leading figure in both the US army and later the US Government where was the US Secretary of Defence to President Graham.

Secretly however, he had strong ties to the leading pharmaceutical firm, Tricell – actively promoting their viral research on the T-Virus into developing “super soldiers” B.O.Ws for use in combat situations. Wilson also harboured a strong distrust of China, believing the nation to be an inherent risk to the US Government and its position in world politics and development in biological warfare. 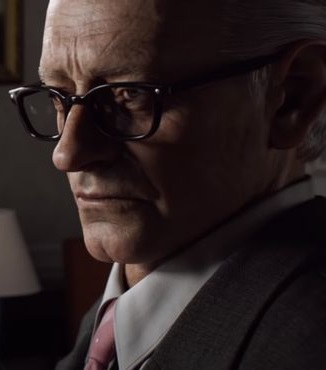 Prior to Wilson’s appointment by the White House, he was a Colonel in the US Army. Following the destruction of Raccoon City in October 1998, Wilson began colluding with Tricell to develop a new type of bio-organic weapon – a super soldier. It is unknown how much information and more importantly access to viral agents he had, but samples of the early variants of the T-Virus were made available to the pharmaceutical enterprise.

Using the virus, Wilson wanted to create a breed of super soldier that could be used by the US Government to enhance regular recruits.  A similar approach had been attempted by Umbrella with the UT- Troopers but all data on them had been lost following the destruction of Sheena Island.

By 2000, Tricell had developed a new variant of the T-Virus which now required testing. The variant enabled individuals infected to increase their physical strength making them an extremely attractive proposition. The side effect of infection was that the virus needed to be controlled and contained with antiretroviral medication. Without this, an infectee would eventually become a zombie, albeit one with slightly enhanced traits such as jumping.

The virus was leaked in Panamstan during its civil war as a test bed for its competency. The test subjects however were shot down by militants and as a result of not having a regular supply of the antiretroviral medication, they became zombies.

The Mad Dogs Unit intervened against Wilson’s orders and they too became infected. Fearing the conspiracy was about to be exposed, satellite imagery of the zombies was erased and the surviving Mad Dogs, including Jason were provided with the medication to keep the virus at bay as long as they kept quiet.

Following the US’s involvement in the civil war, Wilson was promoted to Major General before being selected as Defence Secretary for President Graham. This enabled him a greater degree of influence as he maintained his ties with Tricell. Wilson may have also introduced Morgan Lansdale to the pharmaceutical giant during this time.

With his new found influence, Wilson continued to push his super-soldier program and with Tricell, were able to build a vast laboratory underneath Andrews Air Force Base. This housed many soldiers and test specimens being used with the new T-Virus variant.

In 2006 Wilson began to grow even more concerned about China and their increasing influence across the world. Additionally with the Penamstan Civil war in its endgame, peace plans were being drafted up whereby the US Government would have very little influence in the country. This was a disaster for Wilson as the ongoing instability had been the perfect location to obtain test subjects for Tricell.

Wilson, in collusion with Jason and Shenmai stole information regarding a potential Chinese biological development laboratory in Shanghai from their own government and released the variant T-Virus in the White House. The aim was to make the incident appear to be a Chinese led bioterrorism incident.

The plan was a success and President Graham agreed to Wilson’s suggestion of maintaining a presence in Penamstan as a result. However, through the investigative efforts of Leon S. Kennedy and Claire Redfield of Terrasave, Wilson’s involvement with Tricell soon came to light. Wilson was betrayed by Shenmai who had developed her own plans to expose him. Jason, after being shot by Leon took matters into his own hands and returned to the US with teh intention of killing Wilson and then showcasing himself to the world about the corrupt nature of some aspects of the US Government.

Wilson was attacked by Jason, who by now had mutated into a Tyrant-like creature and was infected with the variant T-Virus. He was able to evade death and escape the laboratory. But by doing so, he was now entirely dependent upon the antiretroviral drugs that he had helped create in order to maintain his humanity. His fate is currently unknown.