Shenmei was an Agent working under the US Government but ultimately sought revenge on Secretary Wilson for his part in the testing of a new strain of T-Virus on her brother Jun See.

In 2000 Shenmei was part of the US Army. She was predominately working as a communication technician, relaying orders to the troops on the ground. She was part of the US deployment to Penamstan – an unstable region of Asia that was embroiled in its own civil war. At the time Wilson was leading the observations of the engagement and ordered all troops, including the Mad Dogs Unit – led by Jason to return to base despite the first strike team not reporting in. 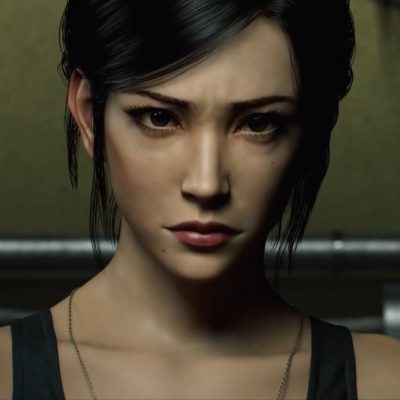 After Jason refused to comply with that order and landed on the ground, Shenmei grew suspicious of her superiors when she overhead Wilson order the complete annihilation of the area despite troops being alive and present. Shenmei was able to leave her post and encountered Jason and his Mad Dogs where they had rescued a US soldier from combat – that solder was Shenmei’s brother Jun. She later discovered that both her brother and now all the Mad Dogs were infected with a T-Virus strain and were dependent upon antiretroviral medication to prevent full infection and mutation into a Zombie.

Jun however, was too far infected by this point and without the medication, he became a Zombie but was contained in a body bag. Shenmei was then able to his body and transport back to China for study by her grandfather’s organisation. Following the tragedy and with thoughts of revenge and anger at the government cover up, Shenmei aligned herself with Jason and together they concocted plans to expose the truth of Penamstan and the wider government involvement in biological warfare. Both quickly established that Wilson was the man behind the conspiracy and both feigned loyalty for a while to forward their plans.

In 2006 Shenmei was called into the White House following a hacking incident on confidential information relating to China. In reality Shenmei was aware of the incident as a way of trying to pin blame on the Chinese so that President Graham would maintain a military presence in Panemstan which itself was edging towards peace.

When the faux-link was established to a Chinese Biologocial Research Centre in Shanghai, Jason, Shenmei and Leon S. Kennedy were sent to China using a untrackable submarine. To further demonstrate this alledlged link to China, during the mission, Shenmei and Jason released B.O.W Rats that quickly killed the majority of the passengers on the submarine. Shenmei and Jason had fled to the engine room where they promptly disposed of the remaining crew. Leon however was able to make it back to the hold out and was reluctantly welcomed back by Jason.

The three fled to mainland China and a safehouse after the submarine’s self-destruct initiated. It was here that Jason attempted to coerce Leon into their scheme, something Leon rejected. After a gunfight, Shenmei escaped from Leon and made her way back to the family home. Here Jun See was being treated by their grandfather albeit little progress appeared to have been made in the 6 years since his infection.

Leon tracked Shenmei back to the home where she revealed to Leon they have a secret data chip of Wilson’s crimes which they want to use to expose Wilson once and for all. Suddenly the mansion is attacked by Jason and the home is bombed to pieces killing Jun, Shen’s grandfather and guard in the process.

Following this tragedy, Shenmei believed that Jason was taking additional steps to their agreed plan. Jason was fixated on the fear he experienced in Panemstan and wished to demonstrate the corruption of the US Government to the world. The pair realised that the upcoming peace accord between the US and Panemstan that was due to be signed would be Jason’s target for this event. The pair made their way back to the United States to confront Jason.

Beneath the airbase, Wilson’s secret test laboratory had been used to develop his super-soldiers. Jason had indeed returned here and in doing so confronted Wilson. However, with his antiretroviral medication he mutated into a Tyrant like creature and infected Wilson with the T-Virus. Attempting to stop Jason from causing any more harm, she pleads with the mutant to little avail. Shenmei is then violently killed by the creature as her neck is broken.