Sherry Birkin was an only child born to the ambitious minds of William and Annette Birkin; both Umbrella researchers stationed at Arklay Labs in the mid-western United States. Unfortunately, both Sherry’s parents were career minded and obsessed with their work, resulting in her being raised without being shown much love and affection. Sherry quickly got accustomed to being on her own for long periods and this resulted in her developing a withdrawn personality. She would often hide her feelings and was not very talkative.

She attended Raccoon East Elementary School and was there on the day the t-Virus leaked in the City and Annette called her in a panic and instructed her to go to the police station right away. It was late September 1998 and Umbrella had sent in the U.S.S. Alpha Team to forcibly retrieve the G-Virus from William Birkin. But during the mission Birkin injected himself with the virus and went on the rampage, resulting in the t-Virus leaking across the entire town. 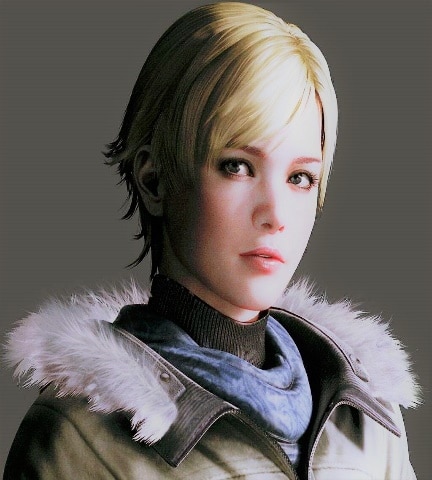 Sherry did as she was told and hid at the R.P.D. for several days, using the ventilation system to move around the building. The police officers gradually became fewer in number until eventually she couldn’t find any more at all. She also occasionally heard the growl of a large monster and became convinced it was actually calling out her name. This monster was in fact the mutated William Birkin who was looking for his daughter to implant her with a G-embryo. By September 29th, Sherry was found by Claire Redfield, having previously ran away from Leon S. Kennedy. Although Sherry was afraid of her at first, when Claire identified herself as a human, she relaxed and the two of them went on to work together to escape the town.

However, there was a strange shadow which relentlessly pursued Sherry while trying to escape from the police station. It was the mass production type Tyrant that Umbrella dropped in the police station. The purpose of its pursuit was the recovery of the G-Virus. A sample of the virus that William concealed was stored in the locket worn around Sherry’s neck. There was no way Sherry could have known such a thing was in her personal effects so she could merely try to escape. While the Tyrant’s pursuit continued, Ada Wong, a female spy sent in from the rival company, gained the locket in question. She was also waiting for a chance to secure the G-Virus for her own employers. Although it seemed that Sherry was no longer a target due to the locket being taken, a further threat of evil design began and the situation became increasingly aggravated.

The threat was her father William Birkin, who was now the monster “G”. He, who lost his human heart due to the power of the virus and dictated by his instinct, attempted to implant his embryo in his child to make her a vehicle for the virus. Whilst Sherry was separated from Claire, he succeeded in infecting her with an embryo. Sherry was reunited with Claire and the two of them eventually reached the main underground laboratory. Sherry became ill and was left behind in a security office while Claire went off in search of help. This was found in the form of Annette. By this point she had been mortally wounded by William but told Claire how to make the DEVIL vaccine that would save Sherry’s life. She used her final moments to tell Claire how much she loved her daughter and how she regretted not spending more time with her. Claire was successful in administering Sherry the vaccine and together they finally escaped Raccoon City alongside Leon.

In the aftermath of the incident, Claire set off to find her brother, Chris, whilst Leon and Sherry were taken into custody of the U.S. Government and detained. Because of the G-antibody in her system, Sherry was subjected to numerous experiments. She was also used as a bargaining chip to force Leon’s co-operation to become a U.S. agent. One of the official reasons given for her confinement was to keep her safe from Albert Wesker and agents of the rival company. Because of the trace amounts of G-Virus left in her blood, Claire Redfield stayed by Sherry’s side during a traumatic period where she had to suffer daily tests and experiments.

Whilst it was Claire who provided emotional support, it was Derek Simmons who became her legal guardian for she had no more relatives. Claire visited Sherry as often as she could, trying to help her overcome all the trauma she had endured. Sherry idolised Claire, and was determined to be just like her: a strong, capable woman. For his part, Simmons was not without compassion for the orphaned girl, and he allowed Claire, a civilian, to visit and comfort Sherry, even though the girl’s existence was a closely guarded state secret. He wanted stability for her fragile mind. Throughout this time, Sherry remained safe in her confinement.

Although Wesker’s organisation had spies within the U.S. Government, he already had access to the G-Virus thanks to Ada Wong and so he never came for her.

Over the next few years, the experiments continued. Researcher Carla Radames was given secret access to Sherry’s blood work to advance the C-Virus and as time went on, it became apparent that the DEVIL vaccine had only halted the spread of the G-Virus throughout her body and not destroyed it. By the time she completely grew up, she could control the virus’ power, resulting in incredible regenerative abilities. She also developed a high resistance to most other viruses. In addition, this resistance all but halted her physical aging process, making her appear younger than she was.

In 2009, Albert Wesker was killed and the rival company had turned their interests elsewhere, meaning Sherry no longer required any protection. The experimentation on her body had also concluded but in order to keep her close, Simmons offered her a position as a U.S. agent fighting bioterrorism. She accepted this offer under the belief she could help others like herself. Claire’s influence on Sherry was big, and Sherry inherited her motherliness and tolerance. Before long her house arrest was cleared and she became an agent, obtaining a restricted freedom. Although Claire belonged to an NGO and flew around the world while Sherry was a U.S. agent, each with busy lifestyles, they displayed their closeness and spent time together when their schedules permitted. Finally, Sherry could cast off her brutal childhood and was now a strong, tolerant woman with a strong heart and strong beliefs. She also remained friends with Leon.

For three years, Sherry worked on classified missions across the globe but was still relatively inexperienced by the time Simmons ordered her to the Edonia Republic in December 2012 to locate Jake Muller; the son of Albert Wesker who had inherited his father’s unique blood type. Before she left, she sent Claire a letter telling her not to worry. Once in Edonia, Sherry successfully made contact with Jake and escorted him to safety with some help from the B.S.A.A. and Chris Redfield. She also secured Jake’s cooperation in exchange for $50 million. However, their evacuation helicopter was shot down by the Ustanak; a B.O.W. developed by the terrorist organisation, Neo-Umbrella, who wanted Jake for their own nefarious purposes. Sherry was badly hurt in the crash, but her extraordinary healing abilities saved her life. Although they tried to get off the mountain and head to the rendezvous point, they were captured by Carla Radames and taken back to Neo-Umbrella’s headquarters in China.

Once again, Sherry was subject to daily experiments on her body for over six months before she and Jake managed to escape. Sherry knew all about Jake’s true father and felt she could relate to him because of what ,happened to her own dad. Together they made a good team and began to show signs of developing feelings for one another. She contacted Simmons for help and was somewhat surprised to find he was already in China. They arranged to meet and soon found themselves in Lanshiang which was under assault by the J’avo creatures created by the C-Virus. They met up with Leon Kennedy and Helena Harper and she began to doubt Simmons’ true intentions when Leon warned her that he was the potential mastermind behind everything that occurred in Tall Oaks and China.

When Simmons did eventually confess, she passed Leon a data disk that contained Jake’s medical information, proving that he had the antibody to combat the C-Virus. Soon afterwards, Sherry and Jake were again captured and this time were taken to an oil field roughly 80 miles off-shore. Chris Redfield and Piers Nivans, the only surviving members of B.S.A.A. Alpha Team, were sent in to rescue them. After being freed, Sherry and Jake worked together to defeat the Ustanak for the final time. She then got Jake into government custody where his blood was used to synthesise a vaccine for the virus. Following the incident, Sherry remained in touch with Jake and continued her work as a U.S. Agent.