Sheva Alomar was born into an impoverished family in a small industrial town in West Africa. The town was home to Umbrella Plant 57 and employed many local residents, including her parents. Although the pay was low by most nation’s standards, it provided a steady income for the townspeople and Sheva was able to experience a reasonably happy childhood. She lived with her parents for 8 years until 1994 when Umbrella conducted a secret B.O.W. test at the factory and they were killed as a result.

The Umbrella Security Service were called in to secure the plant and the whole event was covered up as an accident with the entire site burnt to the ground to destroy all evidence of any wrongdoings. 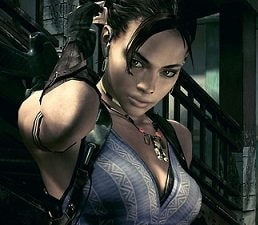 The U.S.S. agents proceeded to eliminate any remaining adults from the town but Sheva was safely smuggled back to her house by one of her neighbours. Scared half to death, Sheva waited in vain for two days for her parents to return only for her uncle to turn up instead and inform her they were dead. Removing anything of value from the house, her uncle then took Sheva back to live with his family, taking her away from the only home she had ever known. Her life with her uncle was brief. Not only was her uncle’s family extremely poor, but he also had seven children of his own to care for. Even though Sheva was a blood relative, he probably never would have come for her if he hadn’t thought he would receive financial compensation from the factory. But that compensation never came and Umbrella never gave out any payments. Soon, her aunt and uncle were unable to feed her and Sheva’s uncle became indifferent to his niece.

Life was hell for Sheva, not only was she on the verge of starvation, she yearned to be with her parents again. In her grief, she became fixated on the notion that they were still alive. As the days passed, this belief grew so strong to the point where she could think of nothing else. She knew she had to find them and so one night as the moon bathed the savannah in silver, Sheva ran away from her uncle’s house and headed back to her hometown and the life that was stolen from her. The thought of her parents drove her on. But the expansive savannah was a harsh environment for one so young and small. During her second night, she began to feel the effects of malnutrition. Unable to find food, Sheva soon collapsed and was later found by a member of an anti-government guerrilla group. This stranger gave her food, shelter, and a place to finally call home. He also told Sheva the truth behind the supposed ‘accident’ that killed her beloved parents.

In reality, the purpose of Umbrella Plant 57 was to manufacture illegal biological weapons, although none of the regular employees were ever aware of what they were creating. The accident at the factory was actually the result of Umbrella’s final test on its newest bioweapon. Once the test was labelled a success, Umbrella concealed the entire affair. With the assistance of the government’s army, they destroyed the factory along with the entire town. The truth filled Sheva with a new hatred toward both Umbrella and the government who so easily sided with the twisted corporation. This rage inspired her to join the guerrillas in their fight against the government.

She started out by doing laundry, cooking meals, and taking care of other chores. After only a few years, she was given her first gun. She never liked to talk about her time with the guerrillas. Perhaps the memories are too painful, or maybe she’s too ashamed of what she did there. Despite all this, she learned to control her fear and developed impressive survival and shooting skills. One of her main duties with the guerrillas was to go into town and purchase supplies for the group.

She was on an errand one day in 2001 when she was given an anonymous note explaining the guerrillas were planning on making a deal with Umbrella to obtain bioweapons for an assault on the government. Although the content of the message was a shock, Sheva knew it was most likely the truth. She met with the message’s sender, a representative from the U.S. government, and worked out a deal. If Sheva helped him apprehend the representative from Umbrella, he would let the guerrillas go. She agreed and the resulting mission a few days later was a success. The U.S. government representative recognised Sheva’s abilities and offered her a new life in America. She took up the offer and shortly after arriving in America, her high intelligence and drive allowed her to surpass any and all expectations, even to the point of learning English to a native level in just six months.

She continued traveling America for several years, eventually enrolling at university. After graduating with high honours, the same U.S. government representative, who was now her legal guardian, suggested she join the newly re-organised B.S.A.A. to help others as she had been helped. Her mysterious guardian was one of the ‘Original 11’ who founded the B.S.A.A. alongside Chris Redfield, Jill Valentine and Clive O’Brian. Umbrella had already been dismantled years prior, but Sheva had not given up her hatred of them and all others like them.

After completing basic training, she returned to Africa and was assigned to the unit led by Josh Stone. She trained intensively in practical combat for eight months. After competition of her training, she was handpicked to become a B.S.A.A. Special Operations Agent and became involved in operations throughout the world. She was eventually stationed as part of the B.S.A.A. West Africa division, and her colleagues held her in high regard. She was known for both her excellence in hand-to-hand combat and her compassionate and honest nature.

In 2009, Sheva worked alongside Chris Redfield during an operation in the Kijuju Autonomous Zone to apprehend a bio-weapons smuggler by the name of Ricardo Irving. Because the newly installed local government were mistrustful of foreigners, Sheva’s inclusion alongside Chris was believed to be a political decision designed to put the locals at ease because of her ethnicity. When the mission turned sour thanks to the reveal of the Uroboros Project, Sheva elected to stay with Chris and avenge her fallen brothers by helping him locate the missing Jill Valentine and put a stop to Chris’s long-time nemesis; Albert Wesker. Following that successful mission, Sheva remained with the West African branch.

In 2012 following Chris’s disappearance after a disastrous mission in Edonia, Sheva sent Piers Nivans an e-mail offering her support and that of the entire West African branch in the search, telling him that they will always hold Chris in high regard.