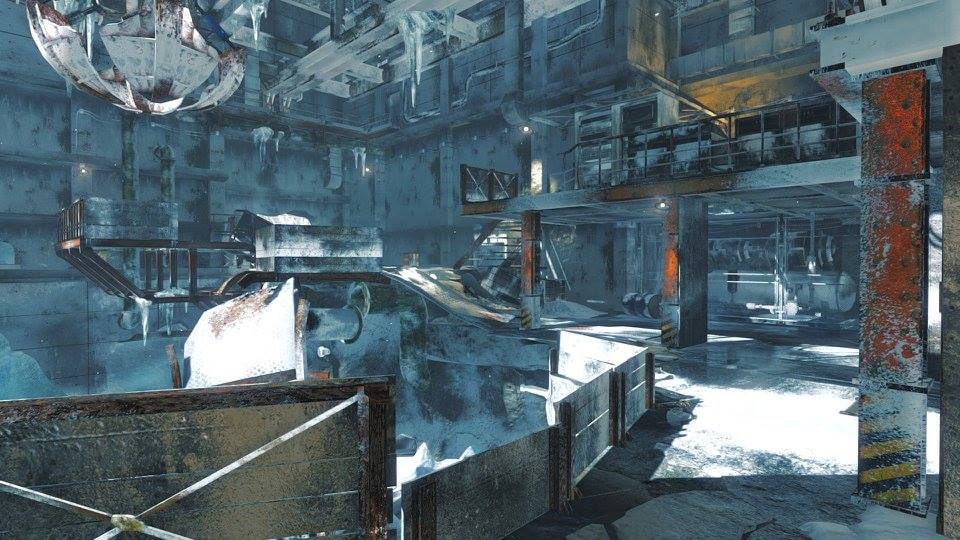 The Antarctic base was originally an abandoned transport terminal owned by the Ashford family. In the late 1960s, Alexander Ashford hatched a plan to convert and expand the complex into a large scale research facility. This was to ensure the classified Code: Veronica plan could be conducted in complete secrecy and well away from the all-seeing eyes of Oswell Spencer. Construction took ten months from February-November 1969 and Alexander and his staff immediately relocated from England to continue their work. As well as extensive laboratory facilities, the base included a main hall replica of his European mansion; the designs of which had been crafted by the late, great George Trevor for a once-proposed new Ashford stately home. The designs were similar to those done for the Arklay Estate and the end result was several rooms looking remarkably similar to Spencer’s mid-western American retreat.

The base was unremarkable from the outside, with the appearance of just a few unmarked outbuildings, a large hangar, some storage facilities and a raised heliport platform with steps leading up on either side. The top of the observatory protruded out of the surface and everything was painted white, making it hardly distinguishable from the surrounding blanket of snow. No company logos were present to identify it as an Umbrella facility and the site was located at southern longitude 82.17, approximately eight miles away from an Australian observation base. It was also roughly 3000km south of Rockfort Island. The official purpose of the site was a storage facility for packaging and transporting cargo, but down below more sinister machinations were afoot. Due to the hostile conditions of the South Pole, a majority of the facility was housed deep underground with six subterranean levels overall. The hostile conditions and isolation were suitable to continued virus research.

The main hub of the facility was built around a giant circular atrium exposed to the elements above via a retractable roof of the observatory. An underground hangar allowed for storage of two VTOL jets reserved for high-level officers such as Alfred Ashford coming to and from the facility. The exit door here led to a central walkway running around the central atrium where a ladder led down to the next level. A set of double doors marked the entrance to the main materials and sorting warehouse. This factory was comprised of two levels including workshops, power rooms, a parcel room with automated conveyor belts and a B.O.W. storage area with specimens kept in experimentation cylinders and stasis tubes, Anti-B.O.W. gas was also kept here for emergencies. In later years creatures such as the Black Widow and the Moth were developed, stored and shipped from here as well as various other biohazardous materials and chemicals. The factory also housed a weapons room which also contained explosives and a machine room full of cranes, snow ploughs and transport equipment. There was also an emergency valve to shut off the gas supply in the result of any serious leak.

Moving back to the main atrium, the next door down led to the workers quarters. This was a very confined, cramped sleeping area made up of single bunk beds. Here the workers would use what little time they had free to relax, play cards and watch television. The beds were all cramped close together with small privacy curtains. At the back of the room was rows of employee lockers for storing belongings, some shelves for books and other basic amenities, and a small table for reading and playing chess or cards.

A metal stairwell next to the worker’s quarters led down to the next level where Alexander Ashford’s office was housed. It was decorated with rich red wallpaper and more lavishly furnished than the basic worker areas with many fine antiques and ornaments as well as an ornate writing desk and computer. In later years this office would be taken over by Alfred and contained a secret door leading to the cell where his own father would be incarcerated for 15 long years following his cruel capture and injection with the t-Veronica virus. Outside the office another set of double doors led into the lower floor of the parcel sorting room.

Back upstairs beyond the warehouse was a corridor containing a B.O.W. testing room and water tank. A small transport elevator here led directly down the weapons room below. Back outside the corridor ran on to an elevator leading down to B5 Level. This area contained a mock front replica of the Ashford’s English residence complete with a fake garden, sky and courtyard. Inside the mock house were replicas of the main hall and reception room, all reproduced from George Trevor’s original designs. The main hall replica also contained the hidden entrance to the main laboratories housed on B4 Level. Access could only be gained by combining three proofs of Ashford family lineage. These were Alfred’s ring, Alexia’s choker and Alexander’s Pierce. These labs were the centre piece of the Code: Veronica project and used exclusively for cloning and genetic engineering. It was here that Alfred and Alexia were born. Within the laboratory areas were several small offices and two bedrooms also taken from the original Ashford manor. Upstairs was a stately meeting room and this was where Alfred and Alexia recorded their home movie of pulling off the dragonfly wings and feeding it alive to the ants. Also from the main hall, the upper floor balcony led to a sitting room and ornamental corridor that connected to the labs via a single door. Beyond here was a prison area and a large gantry where the Linear Launcher was installed. A single door here could be unlocked using a completed dragonfly key which permitted access to the self-destruct system for the entire base. The facility’s lowest level was B6, which contained the control chamber where Alexia Ashford was put into cryogenic sleep for 15 years in order for her body to adapt to the t-Veronica virus. Outside was another large atrium where the ants nest and Alexia-Pod was situated.

Over the years as Umbrella Corporation expanded, the Antarctic Transport Terminal became the official South Pole Branch of the company and was mainly used for the cultivation and transportation of chemicals. In 1993 Alfred Ashford took over the base after graduating from university but chose to spend a majority of his time running Rockfort Island. When he built a private palace on the island for Alexia and himself, he had two replica his and hers bedrooms created from the exact specifications of their counterparts at the South Pole base. Several years later the Antarctic facility fell into decline with numerous reports of an unhappy atmosphere and mistreatment of workers. It soon became a source of frustration for Umbrella and Joel Allman, Vice-President of the USA branch, was very outspoken about the poor running of the facility. Although Code: Veronica was a success, the biggest achievement to come from the South Pole labs was the t-Veronica virus, originally created by Alexia in the early 1980’s. The base itself was originally thought completely destroyed following activation of its self-destruct device on December 28th, 1998. However, some small portions of the complex survived intact and in later years its ruined husk was used as a controlled combat zone by the illegal ‘red’ faction of Blue Umbrella PMC to test B.O.W.s against trained combatants with specialised equipment. The existence of the base is known to them thanks to their former guise as the rival company, with H.C.F. sent here back in 1998.