The Spec Ops field unit were a highly trained and highly competent branch of the U.S. Army consisting of small teams of skilled operatives specialising in areas such as demolition, heavy weapons and infiltration. All operatives had previous military backgrounds and underwent a rigorous training and selection process before they were accepted. Because of their training the Spec Ops boasted top of the range weaponry and equipment, a very high mission success rate and made an exception to the rule of females not being considered for active combat roles in the U.S. Military. In September 1998 a Spec Ops team was deployed to Raccoon City to extract William Birkin and his G-Virus before Umbrella arrived to seize it by force. But thanks to bad intelligence, the initial team ended up at the P-12A Incinerator facility rather than Birkin’s lab. 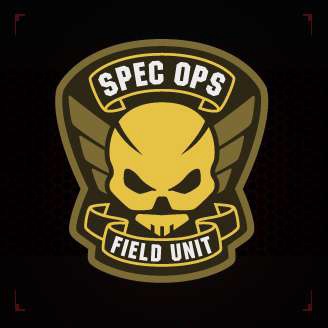 A second team was quickly mobilised but failed to reach Birkin in time. Following the large-scale biohazard that engulfed the city, a number of Spec Ops units were deployed into Raccoon City to investigate the outbreak. Their mission parameters included collecting evidence against Umbrella and to rescue important individuals that knew the secret of the incident.  Throughout the incident Spec Ops teams engaged Umbrella’s B.O.W.s including the T-103 Tyrant. 5 of which had been deployed to the Dead Factory by Umbrella to intercept the team seeking to recover Birkin.  Despite having access to the experimental rail canon, the Spec Ops suffered many losses in the process.

It is unknown exactly how many operatives made it out of the city alive and what the mortality rate was. Standard issue weaponry included the M4 Carbine, H&K MP5, Mossberg 590 shotgun and Browning Hi-Power pistol. All operatives wore Kevlar body armour.