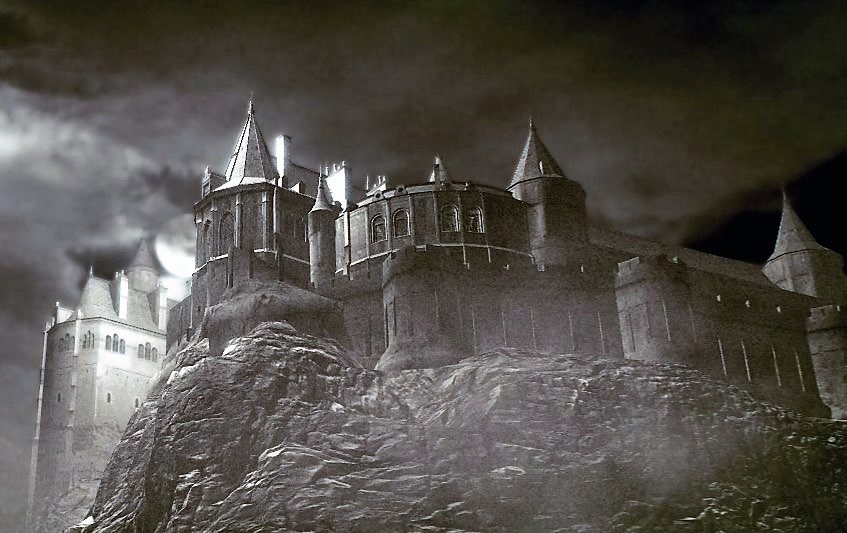 The Spencer Estate is a grand, old country retreat located somewhere in an undisclosed part of Western Europe. This expansive villa has been in the family for generations, dating back to the time of Oswell’s great-grandfather in the 19th Century. It was in a rural location, surrounded by dense forest and situated on the edge of a cliff overlooking a picturesque lake. From the rear it gives the impression of an almost gothic-looking castle, but this look is deceptive as from the front it looks like a regular mansion house and not too dissimilar to the one later constructed by George Trevor in Raccoon Forest.

If one wanders the halls of the estate, it is easy to see that Spencer obviously wanted the Arklay mansion to retain the distinct look of his European retreat. The main hall is almost an exact copy with a huge grand staircase dominating the middle of the room and the flooring is marble tiled with exquisitely etched medieval designs. A single door leads to the east wing and is locked by means of an emblem bearing a Centaur. For added security, whenever this section of the house needed locking up, the emblem is kept in a hidden compartment in the piano room, located upstairs above the dining room in the west wing. The main hall is sparsely decorated, with only a few tables and chairs in the corners. The walls are dull, pale grey and the sections behind the staircase bare concrete. A single portrait hangs on the wall, with an exact copy on the opposite side depicting an unknown female whose face is mysteriously defiled. The room is predominantly lit by candlelight and a large chandelier hangs from the ceiling. Above the front door three huge vertical windows cast light into the room from outside and around the back of the staircase is a small alcove with a door leading to the cellar and underground chambers. This door is protected by a portcullis which can only be raised by use of a special crank. As some unsavoury goings on occur down here, this area is generally off limits to Patrick and Spencer’s other aides. The crank is kept in a safe in a hidden room just off the Study. Opposite this door on the back wall is a switch that unlocks the security gates on the second floor balustrade.

The west wing of the estate contains the dining room which houses a magnificent oak table and an impressive marble fireplace. An antique grandfather clock ticks softly and on the opposite side is an alcove up some steps behind a looming portrait of Spencer himself. Numerous antique cabinets are present and a beautiful painting of the exterior of the estate dominates the main wall, looking upwards from the cliff base. An upper balcony encircles the entire room and the windows afford a surrounding view of the area but have all been barred for security reasons. Upstairs from the dining room is the music room with a large grand piano. This space contains a hidden chamber concealing the Centaur emblem needed to unlock the Eastern Wing of the house. The chamber can only be revealed if Beethoven’s Moonlight Sonata was played on the piano, a personal favourite of Spencer’s. He would have this puzzle replicated in his mansion at Arklay Labs in later years.

The door to the east wing contains a corridor running down to Spencer’s main study area. This room is filled with crammed bookshelves and features an antique writing desk. In later years this place kept his computer and all his archived files. A hidden room behind a false wall contains a security room protected with a spiked ceiling trap. In here is a safe containing the crank needed to raise the portcullis and permit access to the cellar and prison area. Also in the east wing is a large storage area and this room is full of old boxes and crates, as well as bird cages, gardening implements and bags of compost. The adjacent ceiling trap puzzle can also be deactivated from here.

Upstairs on the east wing is the master bedroom, outfitted with traditional four-poster bed and finely crafted antique furniture. From the second level balcony in the main hall, a set of double doors with an electronic lock leads to one of the towers at the back end of the estate containing the main library. This was a grand room spanning two floors with its entire diameter covered with glass-cased wooden bookshelves protecting thousands of rare old tomes. In here the books are preserved and can be accessed via a ladder attached to rails on the wall. A large table stretches out across the centre of the room next to a reading stand and stained glass windows look out onto the lake below.

Beneath the estate is a network of prison cells spanning two floors. It is very inhospitable-looking and its origins are unknown and likely related to ancient mining tunnels. The estate is also littered with many outside courtyard areas and a number of rivers and streams run through the grounds thanks to a waterfall cascading down from the cliff tops. But all these areas only account for one small portion of the whole estate, for there are many more. A state of the art lab facility is also present and was the site of an early Progenitor Virus breakthrough by James Marcus. The grounds are located near to a harbour and this port contains many warehouses and is rumoured to be connected to the Spencer Estate via a series of underground tunnels.

Originally, the manor operated as a villa for the most prestigious amongst Western nobility. Although Spencer had many different residences across the globe, this was the place where he spent his most formative years. James Marcus would also come to call this place home for a brief time when he moved in sometime in the 1960s. The lab equipment was top of the range for the time and was the main reason Marcus took permanent residency here following his academic problems in Switzerland. Edward Ashford was also a frequent visitor, and their every need was tended to by a loyal line of butlers and servants.

Although Spencer eventually moved on to pastures new, the estate remained and was tended to by the now adult Patrick and his loyal staff, keeping everything in order until the eventual return of their master. Spencer returned in 2003 and remained in hiding for three years following the collapse of Umbrella.

Following Spencer’s death in 2006, the B.S.A.A. remained on site for three months whilst searching for the bodies of Jill Valentine and Albert Wesker after an arrest operation for Spencer ended badly. The fate of the Estate today is unknown, though it was likely either sold off or remains unoccupied.