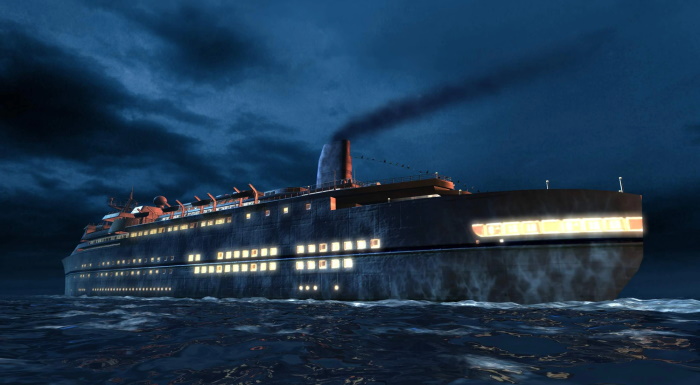 The Spencer Rain was a grandiose luxury cruise liner owned and operated by Umbrella. Unlike the three Queens, this ship was not under the banner of the Paraguas Line and was not based off designs by George Trevor. There were no hidden laboratory facilities on board and originally the vessel was used as a retreat for corporate VIPs and wealthy clients. It was named in honour of Umbrella’s last living founding member, Oswell E. Spencer. Following the business suspension imposed on Umbrella by the U.S. Government and the subsequent closure of Umbrella U.S.A., the corporation built up a revival plan behind the scenes using front companies and began conducting research and development on many off-shore facilities well away from the prying eyes of the authorities. But whilst the Queens Semeramis, Dido and Zenobia focused on viral research, the Spencer Rain retained its status as a luxury cruiser and was instead used as a floating auction house for Umbrella to market its latest products.

The ship was built over four floors with two main decks and two basement levels. The 2F level contained the first class cabins and the VIP rooms. There was also a grand ball room with stairs leading down to the lower levels. The décor was lavish and no expense was spared on the design. The first floor housed the second and third class passenger cabins. There was also a dining hall, cafeteria and a kitchen. The highlight of 1F level was the ‘Seven Seas’ lounge and bar which also doubled as a casino. The first floor also contained the Captain’s quarters and the main bridge. Access was available out onto the exterior decks which contained a swimming pool and Jacuzzi. Using a valve handle on the exterior deck allowed access to the basement levels and engine compartment.

The first basement level was split into three sub-areas. The first contained the boiler rooms and a small service elevator down to B2. Further down was also the Cargo Room, the ship’s main hold and the Presentation Room where the B.O.W.s were showcased in secret. The Presentation Room contained a hidden
staircase and entrance back up to the main ballroom via a retracting floor. Also here was the Monitor Room and Ship Crew berths. B2 level at the bottom of the ship contained the main engine rooms and the cramped crew quarters. All four decks were connected by a grandiose spiral staircase in a central atrium at the heart of the ship running from the top of the ship right down to the bottom.

In 2002 the Spencer Rain set sail on a luxury cruise and contained many famous V.I.P.s and wealthy individuals. But the party atmosphere and sophistication of the upper decks were all a façade to hide a secret B.O.W. auction that went on behind the scenes underneath. Products such as the t+G-Virus and the Hunter Elite were to be showcased and marketed to prospective buyers from across the world. The ship was eventually hijacked by former Umbrella researcher Morpheus D. Duvall. All the passengers and crew were killed in a t-Virus outbreak and the Spencer Rain eventually ran aground and sank off the coast of a small island in the North Atlantic that housed a disused Umbrella Waste Disposal Plant.