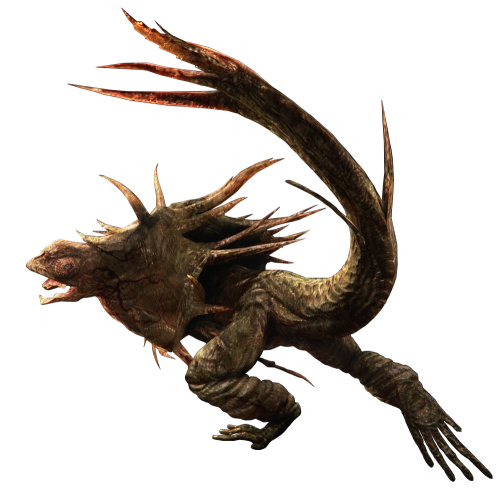 This is a lizard-like Complete Mutation Species named after the Serbian word for ‘archer’. Influenced with reptile DNA, this organism is quad-pedal and crawls around freely on walls and ceilings like a lizard and threatens anyone entering its territory by emitting gas and launching mutated, needle-like parts of its body at targets from afar. It toys with its opponents with sharp, quick movements and will not allow anything to approach it.

When under duress, the creature is intelligent enough to flee and whilst it does not have any obvious weaknesses, it is particularly susceptible to physical attacks. Its appearance is akin to that of a frilled lizard. Its arms have mutated into useless, thin bug-like legs but it has compensated by having hardened bone running throughout its frill. These bones protrude outwards and emit boiling blood. The vaporised blood coming from the holes at first glance looks like it is shining, and more pressure is put on the needle-like spines, causing them to protrude. These spines are a combination of sharpened bone and muscle and large needles slide out and half of them draw back as it lowers its head and turns to the front. When they are ready to fire, the Strelats whole body trembles with the tension.

This creature also has four eyes, yet bizarrely they are asymmetrical with three positioned on the right side of its face compared to just one on the left. Strelats were first used during the Edonian Civil War and Neo-Umbrella were able to collect some useful combat data. They later reappeared during the Lanshiang incident in 2013.