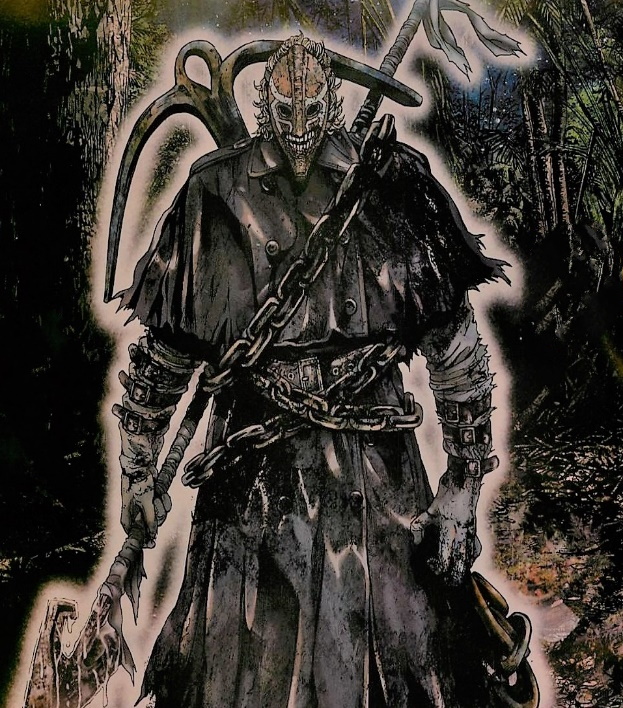 The creature known only as Subject 001193 was once a man called Eliseo Mabou. Eliseo lived on Sonido de Tortuga Island with his younger sister, Marilou, and their parents. In around 2006, Marilou was due to wed a fellow villager named Lopez in an arranged marriage between both families. But being so young, Marilou was frightened and upset about this engagement and this led to Eliseo stepping in to protect her. Eliseo and Lopez clashed many times, until one day Lopez suddenly vanished without trace. Several of the residents of Ague Village had gone missing recently and this coincided with the sudden appearance of a mysterious Shaman on the island. This Shaman used black magic and voodoo rituals to gain control over the villagers and made them do his bidding in exchange for protection.

His identity was Dirk Miller, a former Umbrella Corporation researcher working from a hidden facility beneath the ruins of an old military base. Miller had been working alongside Alex Wesker who had been sent to the island several years earlier under orders of Oswell E. Spencer to conduct immortality experiments. Together they had worked on the Kodoku Plan to create the perfect virus from the perfect B.O.W., but Wesker eventually abandoned the project and fled the island as part of her planned betrayal of Spencer. This left Miller alone and under Wesker’s orders, he applied the Kodoku principle to the remaining research team and one by one they all died until only he remained. Symbolically this earned him Wesker’s complete trust and her permission to continue the experiments alone. But without the resources, funding and test subjects previously supplied by Spencer, Miller had to use the island’s local resources in order to acquire new guinea pigs.

He posed as the Shaman to manipulate the villagers of the island and soon amassed a small band of followers that allowed him to abduct several subjects. Lopez was one of the first to disappear, and Eliseo followed shortly afterwards. Now inside the Umbrella lab, the captured subjects were divided up into differing pots and made to fight to the death until only one such subject survived. The victor would have a sample of blood extracted and recombined with the experimental Kodaku Virus created by Wesker and Miller. Then the next round of combatants were injected with the virus and made to fight again, over and over until finally only one subject would remain. Eliseo was one subject that showed tremendous promise. He was injected with the special virus and became a zombie, albeit with tremendous strength. A majority of his face nectrotisized and his mouth rotted to leave his teeth on display in a permanent sneer. He was extremely aggressive in this form and demonstrated tenacity and intellect. His increased strength was one of many physical characteristics similar to that of a Tyrant.

Like the Schraube Dämon and other promising candidates, the Eliseo-creature was imprinted with a number of keywords to allow Miller to retain some form of control and to prevent any of the locals from leaving the island. But despite all this promise, the monster destroyed all those around him and eventually escaped because he was too aggressive for Miller to control, even with its imprinted programming. Despite now being a monster, memories of when Eliseo was still human would periodically resurface, leading Miller to conclude he was a failure. This escaped B.O.W. had no name and was known only as ‘Subject 001193’; its numerical designation in the Kodoku experiment.

Subject 001193 roamed the island unopposed for the next several years, following its biological imperative to seek out and attack tough opponents and not to allow anyone to leave the island. It donned a tribal mask painted with decorative symbols to hide its horribly disfigured face and wig to give it the illusion of long, stringy hair. It wrapped its body in a battered, blue trench coat and its immeasurable strength allowed it to wield such weapons as a large ship anchor and harpoon, covering its body in chains. Despite Miller having no control over the creature, it still participated in the Kodoku Plan because of its imperative to fight opponents with strong combat experience. Thus Miller would release opponents onto the island and 001193 would track them down and defeat them one at a time. Curiously, 001193 made its home in a network of caves near the beach. Any infected subjects roaming the island with inferior combat prowess ensured he had no need to destroy them. Instead he would gather them up and take them to his cave, where over time he had constructed a small settlement for the zombies to live. It seemed 001193 was trying to recover its former life as a human or alternatively wanted to bond with those it saw similar to itself i.e.: other Kodoku Virus infectants. 001193 could still utter a few words to communicate, but his most unnerving feature was the permanent false grin on his mask and a habit of incessantly gnashing his teeth.

In 2014, 001193 was one of only two surviving subjects of the Kodoku Plan. He was still roaming the island unopposed whilst his rival, the Schraube Dämon, was still under Miller’s control and locked up in the temple ruins. When the cast and crew of Idol Survival arrived, 001193 began hunting them down because they were outsiders and even sabotaged the White Castle cruise liner to prevent any of them from leaving. It also attacked the B.S.A.A. when they arrived, recognising them as strong opponents with superior combat training. The creature also seemed to recognise Marilou and would collapse in pain and refuse to attack her. Its intelligence levels were retained enough for it to remember its own sister. Eventually 001193 was confronted by the Schraube Dämon, the other experiment finalist and in an ironic twist of fate, was revealed to be Lopez, the villager he had originally tried to protect Marilou from. The two clashed in an awesome final battle, and 001193 emerged as the victor, becoming the sole survivor of the entire Kodoku Plan. 001193 was immobilised and a sample of its blood was extracted into an ampoule. This blood was the key to the perfect virus and Zǐlì, an agent of Shen-Ya Pharmaceuticals, planned to steal it. 001193 was eventually killed in an explosion as it tangled with Monster Zǐlì on the beach. Marilou survived the incident and took comfort from the fact that her brother’s final act was to save her life.