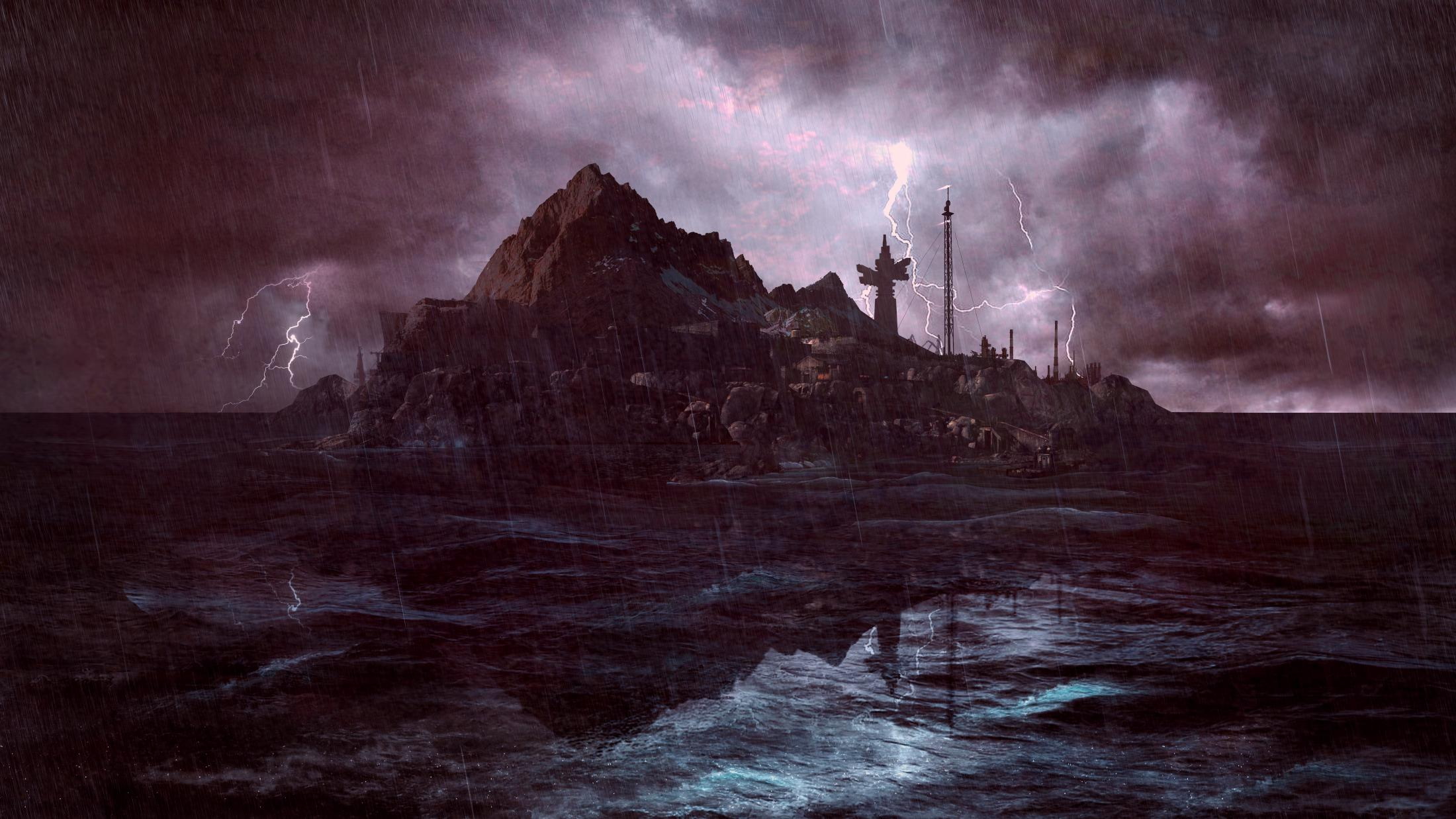 Sushestvovanie was a solitary island somewhere in the Baltic Sea, located far from North Europe with no other islands in the vicinity. This place was first visited by settlers in the early 20th century and soon they developed an expansive mining network. Underground resources were once abundantly produced, with the island entering a period of prosperity despite being so remote. It was home to a single town which became vibrant during this golden period, boosted by the migration of many from the mainland to help dig beneath the ground and enjoy a rich life appropriate to the labour.

But the resources were limited and by the late 1970s the mines inherited from their settler ancestors were depleted and soon ceased to produce anything of value for the natives. The sterile land could not grow satisfactory crops because of the severe climate and there were no good fishing grounds in the surrounding waters. This island quickly fell into poverty and many decided to abandon their homeland and leave. However there were small signs of a resurgence whenever a new dig site was found in the unique geology of the mountains. 1988 was a particularly good year for the mining business, but just six years later the mines had become dangerous thanks to increasing desperation to uncover new resources. The industry wasn’t producing any money at all and by 1994 its workers were made redundant. Soon the island was forgotten by the outside world, its population was reduced to just a few hundred and it was left out of a majority of geography books and maps. Some people referred to Sushestvovanie as Seym; – the forgotten island.

Salvation appeared in 2000 when Alex Wesker visited, carrying the smile of a saintly woman and backed with inexhaustible wealth. Alex praised the dying isolated island as the ideal place she had been seeking. She made great promises to the desperate islanders, promising a program of re-governance and rebuilding if they accepted her. She promised to return prosperity to the island after her subordinates identified the island as having geologically and climatically optimal conditions for researching new drugs and pharmaceuticals. She began building expansive new facilities and expanded the existing mine network, recruiting the islanders and providing them with employment. Over a period of six years the island’s economy recovered and the populace began to refer to Alex as their saviour. It seemed a spark of life had returned to this solitary place once again.

By 2006 the new facilities were finally ready and Alex relocated to Sushestvovanie full time. The residents of the island continued to prosper and truly saw her as their saviour. Under her orders outsiders were banned from travelling to the island and its existence were purged from almost all records.
But it was all just a ruse and over time the islanders were used as test subjects for the so-called fear experiments as Alex and her research team developed and perfected the t-Phobos virus. To cover up the disappearances, Alex had the islanders sign one year contracts to work down the mines so their families would not get suspicious. By 2011, the island was all but deserted following an outbreak of Uroboros and a B.S.A.A. clean-up.

Sushestvovanie is an unofficial term and can also be referred to as ‘Ostrov Sushestovania’ meaning the ‘island of existence.’ The local dialect was Russian.

PRISON: – An old dilapidated detention centre situated on the coastal bluffs near a small dock. It was originally part of the old mining system before being converted to a correctional facility after the resources became depleted on this part of the island. Remnants of the monorail system still exist today. Many of the windows have been blacked out and the experimental block has been outfitted with all manner of torture devices as the prisoners were subjected to fear experiments. Security devices were also installed such as spinning blade traps and a fire-breathing bust was placed at the main entrance to stop the experiments escaping. There were often futile escape attempts made and one prisoner successfully pulled out the bricks of his cell and out into a small tunnel. The prison exterior contains an old watchtower and razor-wire perimeter fencing. It also has a rear entrance that leads out into the forest valley.

RADIO TOWER: – A large tower located at the top of a picturesque valley on the outskirts of the forest. The tower is primarily used for communications with the mainland. Alex Wesker had the signal jammed so disrupt communications but signals were still capable of getting out, albeit delayed. Climbing atop the tower would afford a view of the entire island.

FOREST: – A majority of the island is blanketed by lush, beautiful forest which extends around the large central cliff at its heart. It is home to an abundance of wildlife and the remnants of several old settlements are hidden within. By 2011 they are all abandoned and only dilapidated wooden husks remain.

FISHING VILLAGE: – A small settlement located at the bottom of the island by the beach. Although fishing stocks in general were poor on the island thanks to the harsh climate, the villagers did enough to get by. It is windswept and surrounded by overgrown fields and the base of the cliffs. As well as houses there is a church and a tavern named the ‘Wossek’. In 2008 an explorer landed near the village via helicopter after arriving looking for adventure. Under orders from Alex he was imprisoned by the locals and locked away in the village. As the locals continued to disappear, the explorer was abandoned and eventually starved to death.

TOWN: – This was the main urban centre of the island and where a majority of the population resided. People lived inside several accommodation blocks alongside a children’s play area and the town also housed a slaughterhouse district, industrial zone and a small transportation and road network. A majority of the people here were used in t-Phobos experiments and the remainder as raw materials for Uroboros experiments. Alex took over the factory district and bought out the owner who had kept it in his family for generations.

MONUMENT TOWER: – This large tower was the central hub of Alex Wesker’s operations. She based herself at the top and had a penthouse suite fitted as well as laboratory facilities and a control station for operations all across the island. Large super-computers were installed to help with the digital upload of her own consciousness onto her chosen vessel. At the bottom of the central atrium, the tower was used for storage and underground was an old mausoleum and a connection to the sewer network.

MINES: – An expansive network of underground tunnels that were constructed generations ago when the island was rich with natural resources. The mine entrance is located at the top of a nearby water treatment farm. This leads to a landfill area and a colliery leading down underground. The mines stretch out for several levels although some are contaminated with toxic gas being emitted from nearby fault lines.

LABORATORY: – Located beneath the mines, the laboratory was constructed out of natural caverns in the rocks. A bridge crossed over a large chasm to a lavish, mansion-themed residence which was home to the chief researcher of the science projects. Beneath the mansion was a laboratory build over two levels. A cultivation plant was constructed when Alex and her team came into possession of the deadly Uroboros Virus. The lab ran under two levels of security, with Level 2 reserved only for authorised personnel and the most dangerous experiments.