Little is known about the early history of Svetlana Belikova, other than she originated from the land where oil, gas and natural energy was first procured in Eastern Slav. It is also believed she was part of a powerful oligarch family that enabled her to benefit from a privileged education and an opening into business.

When she was 13, her father was imprisoned in Siberia and she never saw him again, later receiving word of his death via a simple letter. As she came of age, Svetlana enlisted in the military and participated in an anti-Soviet movement as a means of exacting revenge on the country that murdered her father.

She was captured and accused by the KGB of being a spy and tortured. As a result she was left with severe burns on her back that required extensive skin grafts. After retiring from active service she spent some time as a combat instructor and boasted very impressive hand to hand combat skills and lightning fast reflexes. She was also an extremely intelligent and confident woman and the vast capital she raised as a successful businesswoman naturally financed a venture into politics. 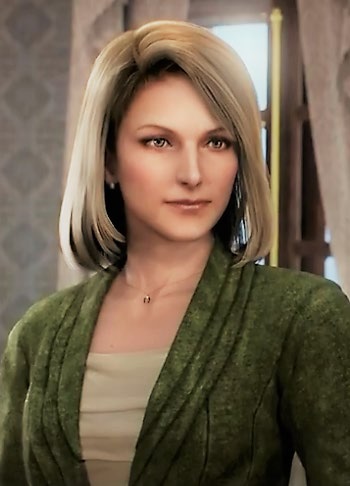 As time went by and the Oligarchs tightened their grip over the fragile Eastern Slav Republic, Svetlana made her move into government and was eventually elected as the small country’s first ever female president. But despite her tough exterior, Svetlana’s true goal was actually world peace and happiness for all and this dream was why she decided to get her hands dirty. She had long campaigned as an aggressor to terrorism and fought hard for the Eastern Slav Republic to be accepted into the European Union to strengthen their own position and end their isolation from western community. But in 2006, Svetlana’s plans were thrown into disarray when the Eastern Slav Republic fell into civil war as the divide between the rich and the poor became insurmountable. The war threw the small country into turmoil and shattered its reputation. Clearly no advancement in global politics could be made until the fighting was resolved and Svetlana endeavoured to try various different diplomatic methods to end the conflict before resolving to use more aggressive tactics. She used the financial power of the oligarchs to provide the military loyal to the government with more troops, better equipment and advanced training. At first this seemed to
work and the rebels under the control of the Council of Elders were driven back, but they would not be defeated. Eventually, Svetlana was forced to turn to more sinister means and resorted to using B.O.W.s acquired off the black market. These were acquired through Yakolev Security; a private company belonging to a larger conglomerate owned by Belikova. But instead of using the B.O.W.s against the rebels she willingly used a front company to provide them to the rebels to aid their cause.

Since the fall of Umbrella, bioterrorism had exploded across the globe and Svetlana believed that if her government and country could be seen actively opposing and fighting bioterrorism directly, it would build up favour with the larger, more powerful and more influential western powers. With her plan in place, she authorised funding to outfit the emergency nuclear shelter beneath the presidential palace in the capital city of Holifgrad with research facilities, eventually creating the ‘honeycomb’ laboratory. She then purchased samples of the Las Plagas parasite through Yakolev Security from the black market and had her scientists go to work on them. Her research team was led by Mikhail Zilika who believed he could create a hybrid species of the Plaga with the ability to send commands to other B.O.W.s. via the unique sound waves they produced. The logical choice was the Licker Betas, whereby direct application of the Progenitor Virus had further evolved their already sharpened sensory abilities. Once the Plagas were ready, Svetlana’s plan was to expose the bioterrorism threat in her country and frame the rebels at the same time before using her government’s military to destroy it, believing this would end the war and justify the Eastern Slavic Republic being accepted into the United Nations. As a means for the governments’ own defence should the rebels ever penetrate the presidential palace, Svetlana also purchased several modified T-103 type Tyrant units through a ‘joint project’ with an unknown organisation. These would only be deployed during an emergency.

Whilst development on the Synthetic Plaga and training of the Licker Betas was ongoing, Svetlana happened across a temporary breakthrough when she successfully negotiated a cease-fire with the freedom fighters. But the break in hostilities was short-lived when the government discovered the rebels’ land contained valuable resources. Inevitably the fighting soon resumed with Belikova claiming publically that her government was now fighting terrorists.
It was shortly after this through Yakolev Security that the government secretly supplied the rebels with B.O.W.s to aid their efforts. Mikhail Zilika had completed the Synthetic Plaga, which allowed the host to give orders to previously trained Licker Betas via the ultra-high frequency sound waves they used to communicate. This Cultivated Plaga afforded the host great power but was also deliberately flawed, for as the Plaga slowly grew to maturity within the body, it would eventually take over the host organism completely and convert him or her into a Ganado. This design flaw was purposefully installed as Svetlana knew only influential rebel members would take the Plaga into their bodies and therefore this Trojan horse would destroy them from within. With those who opposed her wiped out, nothing would stop her advancing her own plans.

Eventually the rumours of B.O.W.s being used in the civil war caught the attention of the Russian and American Governments, just as Svetlana had planned. Ingrid Hunnigan had gathered together evidence that Yakolev Security was suspected of selling these weapons on the black market. These actions also attracted other parties, including the unnamed organisation William Gibson worked for and the independent contractor, Ada Wong. Wong even posed as an advisor from the B.S.A.A. to gain an audience with Belikova, her real mission being to steal a sample of the new hybrid Plaga. However, Svetlana was already one step ahead and had Ada locked up after exposing her as a spy. Unfortunately for Svetlana, she did not anticipate the CIA launching an investigation based on evidence Ada had earlier planted to lure in Leon S. Kennedy. ‘Project Oz’ ensured the U.S. was able to confirm it was Svetlana’s government that had secretly been developing the illegal biological weapons. This caused the American government to immediately pull all its citizens and embassy staff out of the country and join forces with Russia to bring the Eastern Slav government down.

Meanwhile, unaware of these developments, Svetlana let the Plaga spread throughout the townsfolk in Holifgrad, near to the presidential palace. As the number of Ganados began to increase, she had her military seal off and purge the area as an example of her fighting bioterrorism, but by then it was already too late. When surviving rebel Alexander Kozachenko attacked the palace along with Leon, Svetlana released the Tyrants to kill them both, but the air support coalition from the Americans and Russians soon arrived to destroy the creatures with aerial missiles. After the U.S. and Russian invasion, Svetlana dismissed her staff and attempted to shoot herself but her assistant talked her out of it, insisting that the people of Eastern Slav were still on her side. Shortly afterwards, she and her entire cabinet were quickly taken into custody and a temporary government installed. Belikova resigned as president but somehow later managed to evade capture and flee, although this information was never publically released and the Russians and Americans are still looking for her.