The t-Abyss Virus was the result of creating a weaponised variant of the original Abyss Virus which was a naturally occurring pathogen discovered infecting deep-water fish in depths of over 9000 meters in the hadal zone of the Kermadec Trench. The project was conducted in secret by an F.B.C. research team and a Tricell research branch under the direction of Excella Gionne.

Studies showed the Abyss Virus was a major trigger for the evolution of deep-water organisms and was essentially the marine equivalent of the Progenitor Virus. The Abyss virus thrived in high-pressure environments and enabled the infected fish to display remarkable degrees of mobility and ferocity not usually encountered at such depths. 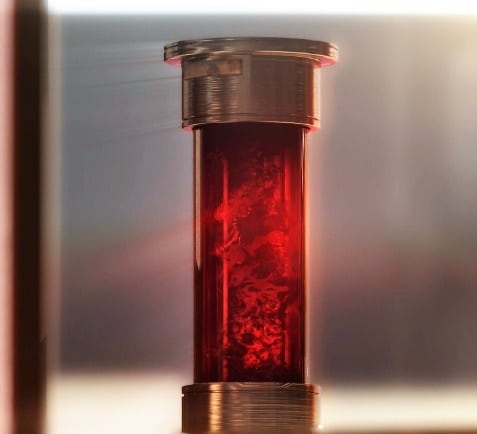 Additionally the virus transformed the large fat and water reserves of deep-sea fish, which are suited to the high-pressure, low-oxygen, low-temperature depths, into high-density bone and muscle structures uncommon in organisms who developed in deep water habitats. The Abyss Virus was extremely potent and through blood transmission carried an infection rate of 99.76%. The only anomaly was that in extremely rare cases subjects who ingested the virus orally did not become infected and researchers eventually put this down to dilution. For weaponisation, the t-Virus was introduced and spliced with the Abyss Virus.

The application of t-Virus genes allowed for cross-species infection, including humans, but the mutation speed derived from the Abyss virus was amplified as a side effect, which led to the body tissue of the infected subject collapsing because they could not take the strain. Researchers overcame this problem by adjusting the rate at which infection occurred in the host’s body. But although this prevented total collapse, sections of the body mass became completely liquefied and the bone tissue mutated. But after sustained periods of adaptation, the virus could transform and strengthen muscle and bone structure. As the t-Abyss Virus spread throughout the host body, it consumed bodily fluids as it progressed throughout the circulatory system, resulting in infectants seeking out liquid sources and drinking the blood of their victims to replenish their reserves.

Infection caused varying degrees of mutation and gave the appearance of a bloated corpse. Individual body parts could swell up and body parts not deemed necessary to the survival of the virus degenerate and were lost completely. For example, certain infectants lost parts of their mouth and jaw which instead evolved into a flexible appendage better suited for sucking up bodily fluids and liquids. Depending on the size of the host, the t-Abyss Virus and secreted fluids boosted metabolism via a synergistic effect.

The virus displayed a variety of effects dependant on the host. Whilst the effects of the t-Virus are easily identifiable, marine traits introduced by the Abyss Virus are what stand out. Human males developed a grey like bloated skin with the appearance of a saturated corpse. A unique reaction for female humans resulted in the development of an enlarged carapace that had the appearance of long hair and covers the entire body. This reduced friction and allowed them to move freely underwater. Some humans have a stronger resistance to t-Abyss and roughly 1-1000 people will undergo a special mutation and turn into a creature known as a ‘Skagdead’. This is a result of increased genetic resistance slowing down the t-Abyss infection. It can take days or weeks for the process to complete and although the host is aware they are being taken over, they cannot do anything about it. Tumours and growths appear all over the body and the end result looks nothing like an Ooze.

As expected the virus was highly successful on marine life and fish developed extra ferocity, mobility and adaption to severe marine environments in ways the standard t-Virus could never achieve. Original t-Virus B.O.W.s developed aquatic traits when created by t-Abyss, with Hunters developing smoother patches of skin, frills on its body and the ability to mimic its surroundings and become transparent like certain deep-sea organisms.

The creation of the t-Abyss Virus opened the door to the field of engineered marine bio-weapons and research data suggested that if a concentrated liquid form of the virus was released in a large enough area of the sea it would contaminate all of the world’s oceans in a very short space of time. This would begin with the infection of marine bacteria which would trigger a chain reaction that would impact all forms of sea life. Mutations would be caused at a genetic level to all life forms in the area, destroying entire ecosystems.

In 2005 a prototype vaccine was developed following data collected from the Terragrigia Panic. During the Queen Zenobia incident, the source point for the t-Abyss virus was sabotaged by the B.S.A.A. and all the development data was destroyed when the ship went down. But Raymond Vester, secretly working on behalf of Tricell, secured a viable sample for the company.