The t-Veronica was a type of t-Virus created by Alexia Ashford in the early 1980s. Initially the objective was to create a superior t-Virus to the strains developed at Arklay Labs under Oswell Spencer’s supervision in order to solidify and reclaim the Ashford family’s hold over the Umbrella Corporation, but that direction changed when Alexia discovered trace remains of an ancient virus within the genes of a Queen Ant. She quickly devoted herself to the study of ants and found their ecology to be a perfect system for a master-slave relationship. A single ant queen dominated a hive and the soldier and worker ants were the slaves, solely dedicating their lives to the queen. She noted a single queen could survive for decades which was practically an eternity by insect standards and this instilled a belief that she herself could become immortal. 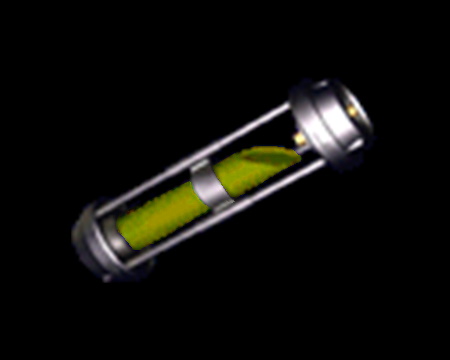 When the queen died the ant hill would always perish due to the collapse of the system, but any soldier and worker losses could easily be replaced. Alexia viewed this relationship as a parallel to herself, a superior being, and the rest of humanity. Her artificial birth at the hands of the Code: Veronica project initiated by her father had left Alexia with astounding intelligence but at the excessive cost of her humanity, leaving her with a cold-blooded personality devoid of all human emotion. This egotistical and megalomaniacal viewpoint shifted the focus of her research into creating a new world order with herself at the forefront as the immortal ant queen.

T-Veronica was an artificial RNA virus created using the base template of Progenitor as raw material and combined with the ancient retrovirus extracted from the genome of a Queen Ant. Finally the remaining sequencing gaps were completed by incorporating plant genes. This fusion was a purposeful one by Alexia designed to create a system of control. In nature plants provided food and shelter for the corresponding ant colony and in turn the ants protected the plant by killing any invaders, even killing other vegetation in close proximity that might compete for nutrients and sunlight. The plant controlled this relationship by emitting complex chemical signals that drew the ants in and compelled them to defend. These same chemicals also sent the ants into a rage whenever the plant’s life-force in under threat.

This relationship is better demonstrated through the fusion of the anthill colony in the Antarctic Base with the ‘Alexia-Pod’; a plant-based organism comprised of a mass of tentacles running throughout the complex.

Upon injection, the cells of organisms infected with t-Veronica are rapidly affected and natural immunity systems were easily bypassed, leading to the destruction of brain cells. This was because the virus worked too fast to transform the cells of the host, often destroying the brain completely and rendering it useless for B.O.W. purposes. The virus has a devastating effect on humans and is just as lethal as other virus types including ‘t’ and ‘G’, but for other organisms it is somewhat less dangerous. Symbiosis with t-Veronica is possible by slowing down delivery of the virus around the circulatory system, allowing the host to slowly adapt by delaying virus erosion. Two such methods trialed successfully include cryogenic preservation and regular organ transplantation. If symbiosis is successful, the host will gain incredible abilities as well as a unique reproductive ability similar to a G-Creature. They needed no food or water for sustenance, and the virus promoted high telomerase activity in the host’s cells which resulted in an infinite replication capacity, essentially making them immortal.

T-Veronica also strengthened the DNA mutation attribute of the base Progenitor which allowed for stronger mutations than regular t-Virus infectants were capable of. Infected organisms developed arthropoda like traits that brought about insectoid mutations and a plant-like hardened carapace. These growths are made up of parenchyma plant tissue containing chloroplasts. The cell growth is multiplied to form a hardened surface capable of acting as a protective shield.

Additionally, a successful host also developed flammable blood that spontaneously combusted when brought into contact with oxygen due to a unique enzymatic reaction. In contrast, an unsuccessful host develops heightened levels of internal toxicity that are dispelled through pores in the body via clouds of noxious gas. This unique poison cannot be suppressed through use of the blue herb alone and Alexia was forced to create a special antidote to counteract its effects.

A successful t-Veronica host is able to control low-ranking infected individuals like a queen, a significant advantage not present in other viruses. In addition, low-level infectants develop an inherent instinct to obey a higher being. This is because the queen ant genes contained within t-Veronica release a property making them subservient to a higher existence. But the manifestation of powers was not constant and each infected individual would have different abilities. Alexia and Manuela Hidalgo gained flammable blood, whilst the V-Complex organism specialised in the control of plants. But failed adaptors such as Alexander Ashford developed extra insect-like appendages from the back of his spinal cord whereas Steve Burnside suffered a body mass increase through exacerbated levels of parenchyma tissue and plant attributes.

Unlike the t or G-Viruses, the true fear of t-Veronica is in evolving and propagating whilst absorbing surrounding ecosystems. Since its diffusion speed is fast and effective, there are few countermeasures available, arguably making it the most dangerous of all the viruses manufactured by Umbrella. Veronica was extremely heat-sensitive and was purposely developed in the severe, deep-cold environments of the Antarctic, ensuring t-Veronica’s proliferation capability was controlled to some extent. But the virus thrived under high temperatures and extreme humidity with the ability to transform and infect entire eco-systems.

In 2002, had the V-Complex organism remained active, it was estimated that 60% of the Amazon would be contaminated within a window of 48 hours thanks to the birth of a ‘Veronica Ecosystem’. This ecosystem would cause a devastating biohazard by absorbing surrounding organisms without limits and thus continuing to spread. This astounding reproductive dispersion capability allowed it to replicate itself indefinitely, destroying already existing ecosystems.

After spending 15 years in suspended animation, Alexia awoke to find her body now coexisted in harmony with the t-Veronica virus. Without losing her brilliant mind or sense of self, she underwent a transformation into a new type of creature. She now possessed the ability of self-evolution and could cast off her human form. By fusing with the ‘Alexia-pod’, she could freely control tentacles set up underground and produce soldier ants.

In later years, the virus was passed onto Albert Wesker and the ‘rival company’ who manipulated it for their own means before selling it onto numerous other organisations. Eventually the virus was detoxified and scrapped, but not before Carla Radames used elements of Veronica in C-Virus research. She took a weakened strain of t-Veronica and extracted and manipulated the DNA mutation attribute of Progenitor before combining it to create a variant known as ‘t-02.’ This strain completely negated rapid destruction of brain cells and solved a problem using modern methods not technologically possible in Alexia’s era. But rather than focusing on further refining t-02, Carla chose instead to apply the results to the new C-Virus project as part of Project Ada.

T-VERONICA – The first strain created by Alexia Ashford in 1981/82. This was injected into Alexander Ashford in 1983 and transformed him into a monster. In this prototype form, the virus caused rapid changes in an organism’s cells too quickly for the host’s body to cope and destroyed mental functions. This strain was scrapped in early 1984 following Alexia’s reported ‘death.’

T-ALEXIA – This term refers to the strain within Alexia Ashford’s blood after she had emerged from cryogenic sleep and bonded successfully with the virus after 15 years. It was extracted and later injected into Steve Burnside. Although it still destroyed the host’s brain cells at a rapid rate, it enabled the host to retain their human form for longer and possess a limited amount of independent thought. Because the virus was taken from a perfectly adapted host who could regain her human form at will, there was an increased chance of subjects exposed to this strain adapting to the virus for a longer period of time.

VERONICA VIRUS – This strain is practically identical to the t-Alexia strain except that numerous testing and tampering by the rival company had weakened it to a certain extent. The virus eroded the brain at a slightly slower rate, allowing the human host to remain in control more. However, it was still dangerous and the 15 year rule still applied unless alternative means were applied for slowing down the rate of infection round the body. One such method was regular organ transplantation, as demonstrated by Manuela Hidalgo.

T-02 – Following the U.S. Government’s acquisition of the Veronica Virus from Manuela Hidalgo, researcher Carla Radames extracted the ‘DNA mutation attribute’ from the Progenitor Virus which had been strengthened via application of the t-Virus. By combining this with the Veronica Virus, she created ‘t-02’, a compound that eliminated any chance of brain cell damage. Up until that point, symbiosis and immunity to the virus took up to 15 years, but that problem was now eliminated thanks to t-02.