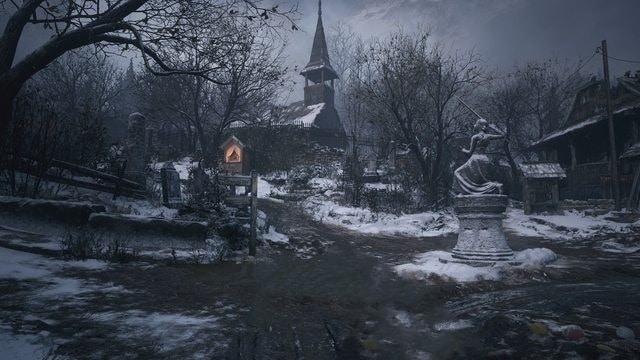 The Village (official name unknown) is a small, isolated hamlet situated somewhere in Eastern Europe. It was the home of a small community who had through the discovery of the Megamycete organism by Miranda fallen under her cult leadership.

However, it can be said with some confidence that there has been a settlement in this location for many, many years with records and architecture indicating the land was first colonised by the original “4 Lords”. Built into the mountain structure, the founders are depicted as Nichola or Nicholas, Berengario, Gugliemlmo and Cesare. It is assumed that a Pagan like society was formed thereafter. By the late Medieval period there were reports of military occupations attempting to take control of the mountainous areas.

The Village continued to remain inhabited for many hundreds of years, largely unaffected by the world outside. In the later 19th century however, the Spanish Flu pandemic hit the Village decimating the local populous. One such victim was a young girl called Eva, who’s mother, only known as Miranda was in despair at her loss. Miranda left the Village and headed into the mountains where she located the Megamycete super-organism that had been gorwing in secret underneath the Village. Upon touching the creature, Miranda became infected with the Mold and was brandished with superhuman abilities including shape-shifting and near-immortality.

Seizing her opportunity, Miranda attempted to harness the power of the Mold to firstly cure victims of the Spanish flu. whilst this worked in the first instance, then soon perished. Miranda’s true purpose was however to bring back her daughter, noting the Megamycetes ability to store memories of the deceased. She required a suitable vessel to perform the ritual and would spend the next 100 years trying to achieve this aim.

During this time The Village fell prey to Miranda’s plans. Now revered as a deity under the guise of “Mother Miranda” the villagers all swore allegiance to her and a cult was formed. One of the side effects of her experiments with the Mold was the Lycan B.O.W – a human wolf like hybrid. Stories of these creatures quickly spread amongst the Villagers with Miranda declaring that she would protect them from these creatures. The inhabitants of curse blissfully unaware that it was Miranda and her newly formed council that were chiefly responsible for them in the first place.

Under Miranda’ rule – Castle Dimitresu was effectively re-opened with Alcinia taking up residence and employing many locals as handmaidens and servants to help produce the local wine. Many would also be used as test subjects too and the reputation of the castle soon spread.

The Factory was also re-opened and the reservoir to help bring power to the region.

In 2021 The Village would ultimately be destroyed after Miranda believed that she had located her vessel in the from of Rosemary Winters. To prepare for the ritual, Miranda ended her control over the many hundreds of Lycan’s that had existed in the outskirts of the Village. They rampaged into the area killing nearly all who lived there. During this time, Rosemary’s father, Ethan was also in the Village and he proceeded to hunt down Miranda to try and save his daughter. With the destruction of the latest “4 Lords” the Megamycete organism grew at an alarming rate. Large vine like tentacles spread underground before erupting throughout The Village. This created enormous blockades that took heavy firepower to destroy. A task that was started by the B.S.A.A.

Ultimately however, it was Ethan’s sacrifice that prevented a wider infection. After rescuing his daughter, Ethan detonated an N2 Explosive that had been planted on the Megamycete itself killing himself in the process. The super-organism was also destroyed and in doing so would have ensured that the majority of The Village was also burnt to rubble.

CHURCH: – A large church that was used by the 4 Lords and Miranda to hold council meetings.

RESERVOIR / WINDMILL: – A large man made reservoir that helped supply the local area with water. The construction of the lake caused older village settlements to be flooded as a result. Large windmills were installed to generate power for the surrounding community.

STRONGHOLD – An area on the outskirts of the Village that has ancient crusader-era connections. Much of the fortress has been destoryed or whethered over the years, but areas remain intact. After the creation of the Lycan B.O.W. the entire fortress was handed over to these beasts where they occupied for over 50 years.

HOUSE BENEVIENTO: – A large well kept mansion on the outskirts of the Village. This was the home of the Beneviento clan and where Donna grew up fascinated by doll-keeping. The mansion itself is beyond the ceremony site and has its own graveyard, gardens and elevator for access. Perched upon the top of a cliff, the mansion has great views of the surrounding countryside and nearby waterfall.

CEREMONY SITE: – A large open area close to the Village itself that was to be used in Miranda’s ritual to bring back her daughter Eva.

FACTORY: – A large workhorse factory that has been operated by the Heinseberg’s for generations. Now under the stewardship of Karl, the factory has been equipped to create not just metal, but also B.O.Ws. Set over a number of floors with accessible elevator, many of the rooms have been retrofitted to help create the Soldat B.O.W that Heisenberg planned to take out Miranda.