Tyrell was employed as an Umbrella Biohazard Countermeasure Service squad member and part of Unit A of Bravo Platoon. He was South African with Dutch origins having been born in the Republic of Surinam, then moving to Holland where he joined the French Foreign Legion.

Although a highly skilled mercenary, he became interested in running his own side business but had no real talent for making money. He earned a reputation as a capable soldier yet as time went on he got involved in black market arms sales. His involvement in one particular lucrative weapons smuggling operation was only discovered when his merchandise was used in the needless massacre of civilians. Tyrell received a dishonourable discharge from the French Foreign Legion and was court-martialled and sentenced to life imprisonment. 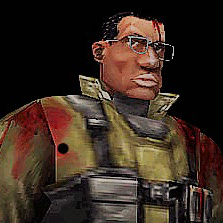 During his time in prison, he contacted the security department of the Umbrella Corporation himself and applied. His talents ultimately got him a job with the U.B.C.S. But joining the U.B.C.S. did nothing to assuage his greed, and so he accepted a position as a Supervisor in order to earn extra reward money.

As an Observer/Supervisor/Monitor he was one of Umbrella’s S-agents that reported directly to the board. He was sent to Raccoon City not only to help fight the zombies, but also to plan and action a secret mission that included the collection of combat data on the various B.O.W.s roaming the city. After being deployed in the late hours of September 26th, Tyrell laid low for several days and completed several objectives until he went to the Raccoon General Hospital in the early hours of October 1st. His mission was to destroy the building to wipe all traces of the experimental t-Virus vaccine data. However, he fell victim to the treachery of Nikolai Zinoviev and was killed. Nikolai himself then blew up the hospital.