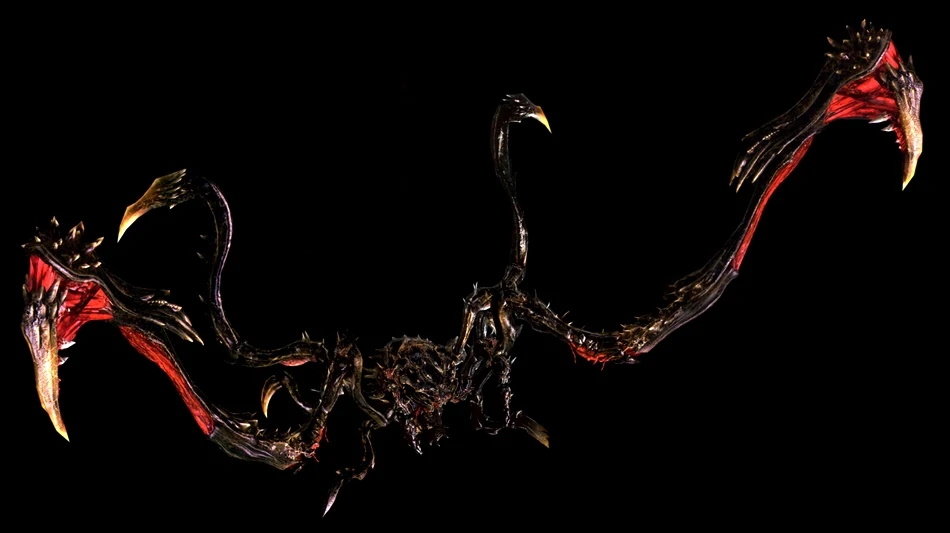 U-8 is name of the B.O.W. born from a weapons development project involving Las Plagas. The creature is comprised of the refined DNA of multiple organisms, specifically the DNA of shelled organisms. The alterations to this aspect of the creature is reflected in its dark colouring. The carapace has an unparalleled durability, and was shown to be resistant to a direct hit from RPGs in tests. U-8 is some tens of meters tall, and its pincer legs are even three meters in length, which it uses as a weapon in close combat. These pincer attacks are not especially quick, but they are powerful enough to pierce the armour of a tank.

Flying drones reside in the part of U-8’s abdomen originally intended for the maturation of eggs in an unaltered specimen. These drones are not larval U-8s, but completely different creatures entirely. In a close-quarter, one-on-one fight, U-8 is an overwhelmingly powerful adversary, but when it has to combat more than one opponent, its large size becomes somewhat of a liability. Its considerable bulk also makes it vulnerable to long-range attacks. To compensate for this weakness, it uses the flying B.O.W.s in much the same way an aircraft carrier uses jet fighters. Although initially promising, the U-8 does have its flaws. U-8’s size can be a detriment because it requires massive amounts of sustenance to maintain functionality. Because it is so large, the specimen can be problematic when transporting to the deployable destination. As such, U-8 is not suitable for long-term assignments.

The creature was designed to be effective as security for a facility or when used in attacks of limited time. Also, U-8 is designed to reach a large size very rapidly, and this breeds imperfections in its carapace. These imperfections are limited to a certain area of the carapace, but a direct attack on this area will severely damage U-8. But even with these flaws, U-8’s functionality, combat effectiveness, and relative ease to control have made it popular in the bioweapons market.

Records indicate that Ricardo Irving has sold a multitude of both the original U-8 and the upgraded version, U-8 Prime (which has a multi-layered carapace for extra defence, along with shell covering formerly exposed areas). There were plans at one point to design a lighter, faster U-8 that could maintain functionality for longer periods of time, but this would result in a significant downgrade in its defensive capabilities. This plan was codenamed ‘U-8 Turbo’ but was ultimately scrapped. The ‘U’ designation stands for ‘Ultimate.’