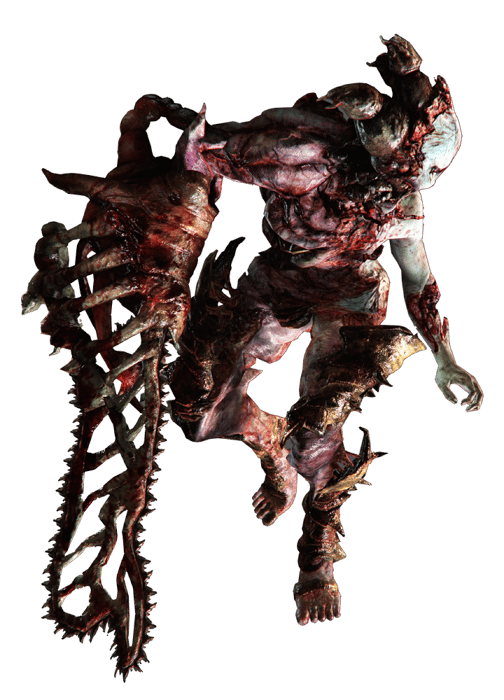 A complete mutation of a C-Virus infected individual. Ubistvo’s name is derived from the Serbian word for “murder.” While humanoid, its right arm has mutated into a chainsaw-like weapon which it uses to mow down surrounding opponents. This arm was formed from parts of the spine and ribs which were moved by the mutation. Ubistvo’s pulsating heart is also housed in this arm, and, regardless of its high vitality and stamina, it can be instantly killed by destroying this weak point.

Not only does the Ubistvo have an incredibly powerful attack, but it will rarely desist once it has chosen its target. While this may appear to be a useful trait for a B.O.W., the Ubistvo makes no distinction between friend and foe and will attack anything indiscriminately. Even Neo-Umbrella researchers don’t know how to effectively manage the creature, and they will only deploy it in situations where a complete massacre is the intended outcome.

When this unique mutation occurs, the right rib cage becomes the body of the saw while the blade is made from the spine. The heart moves as is to the chainsaw and becomes the weak point. The only remaining human area is the left torso, with diving beetle larvae and giant isopod carapace parts comprising the rest of the body. Whilst it has a human shape/silhouette it is still just a skeleton, and other than its left torso, the majority of its body is made up of mutation elements. The actual human heart and frame do not move, but all the mutated parts have purpose and power. Additionally, the remaining human parts are such that they are being pushed by the mutations and the ribs and collarbone are sent flying. The skull pushes up with three-dimensionality because of the pressure forcing it to expand. It has no muscular structure to its face and is closer to protruding bone with bug parts and larvae making up the rest. The skin texture of the protruding parts across its body is bone, but the in silhouette it looks like bug’s legs. The hardened carapace protecting most of its body is from a giant isopod.