The U.B.C.S. was founded by Sergei Vladimir who acted as Captain of the Guard. The origins of the unit came about due to the volatile nature of developmental B.O.W.s that were uncontrollable. During field tests many R&D workers were killed or seriously injured and precious experimental equipment was destroyed, so a professional in-house special operations unit was founded to help suppress out of control products. They existed primarily to control disasters caused by in-house products and were first on the scene of any toxic incident. Most of its members were made up of exiles from various countries’ militaries, or individuals with extraordinary skill sets placed on death row due to heinous crimes they had committed in the past. 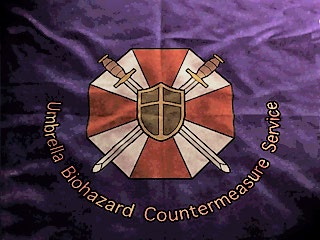 Signing up to the U.B.C.S. was a way to avoid the death penalty in exchange for pledging their services to Umbrella. Many individuals were eager to join as it offered a chance to gain a full pardon for past crimes or refuge from countries they ran away from. Many U.B.C.S. members came from countries that became communist after their national policy was destroyed, and had deep military backgrounds that were put to good use in rescue operations. It was an effective arrangement.

Like the Umbrella Security Service, the U.B.C.S. received anti-B.O.W. and bio-chemical training and were supplied with viral antibodies when dealing with outbreaks, but the main differentiation between the two was that the U.S.S. were elite company employees and military specialists with remits to protect company executives, facilities and classified operations. The U.B.C.S. on the other hand were the more public face of the company, made up of mercenaries and were largely expendable when it came to out of control B.O..W.s and clean-up situations. Sergei founded the unit on the basis that Umbrella specialised in selling biological and chemical weapons to any nation in the world that could afford it. Due to the volatile nature of such weapons, accidents could and did occur from time to time. Since the use of biochemical weaponry was classified by nature, in such cases it was difficult for a nation to utilize its own military to intervene.

This was where U.B.C.S. came into play. Sergei wanted the U.B.C.S. to be responsible for neutralising “products” that had gone out of control, decontaminating the affected areas and rescuing civilians in danger. In addition, a secondary objective of the U.B.C.S. was to conduct performance analysis and collect combat effectiveness data of the various creatures Umbrella developed. They were managed from the same head office based in Europe that also commanded the U.S.S. On the whole, the unit was a complete success and the damage caused by out of control B.O.W.s decreased rapidly, but the mortality rate was high. One notable example was an instance where an experimental Tyrant went completely out of control during an experiment and the U.B.C.S. team sent in to suppress it was completely annihilated. This led to the development of exclusive anti-B.O.W. weapons such as the Umbrella Magnum Revolver from Umbrella Industries. Their standard issue weapons were M4A1 assault rifles and SIGPRO side arms.

U.B.C.S. operatives were typically split into platoons of 30 men, with each platoon further divided into three units or squads from Alpha to Charlie, each containing 10 men. However, on occasion these squads were divided up even further for special operations such as the Echo team deployed into Raccoon City or the unit commanded by Nikolai to subdue the Thanatos Tyrant. The combat experience of the U.B.C.S. was actually higher than the U.S.S. Their missions carried a high mortality rate but the members were constantly replaced and well-trained, resulting in a high proficiency ratio during their missions. Potential recruits were scouted by military co-ordinators. The utilisation of the U.B.C.S. was also built into future contracts when Umbrella signed agreements with countries to sell them B.O.W.s as an after-sales agreement. Should said products ever get out of control and the country could not deploy its own army for risk of the incident going public, the U.B.C.S. would be called in instead to clean the mess up.

The most high profile incident the U.B.C.S. were involved in was the 1998 Raccoon City incident in which 120 members were deployed spread across four platoons. Almost every member was wiped out.

The Monitors were a security measure designed by Sergei to keep watch over suspicious company employees and individuals with access to classified materials. They were placed internally throughout Umbrella and maintained the image of normal company employees to help conduct their activities. There were several placed inside the U.B.C.S. and their orders ranged from spying on fellow employees and destroying evidence, to clean up operations and assassinations. When on operations, surveillance agents were injected with better quality antibodies than their regular counterparts. They were also given classified intelligence on little-known escape routes and provided with reliable methods of contacting outside agents to report their progress and to be rescued if necessary. Individuals selected to be surveillance agents typically had more specialised backgrounds than regular U.B.C.S. members and were never men of conscience.

As far as Umbrella was concerned, it was far easier to control those with a selfish desire for money and were willing to sell out their teammates, rather than those with a strong sense of justice and morals. Nikolai Zinoviev was an excellent fit for the role, given his cold, ruthless demeanour and Tyrell Patrick was another such example. During the Raccoon City incident, Nikolai and the other Supervisors used their own team mates as disposable pawns so their secrets could be preserved. All Monitors/Surveillance agents reported their findings directly to Sergei.