The Umbrella Corps are a highly-skilled, albeit illegal secret Special Forces unit belonging to the reformed Blue Umbrella PMC. Their existence was highly classified and known only to a handful of top-level executives. They specialised in the CQBZ (Close Quarters Quarantined Battle Zone) combat system and were seen as a spiritual successor to the original Umbrella’s infamous U.S.S. unit.

When the Umbrella Corporation was rehabilitated under corporate reorganisation law, due to its moral obligation it dismantled the U.S.S. and was banned as a private organisation from exercising armed force. This proved to be a major sticking point for Blue Umbrella given the nature of the work they were involved in. 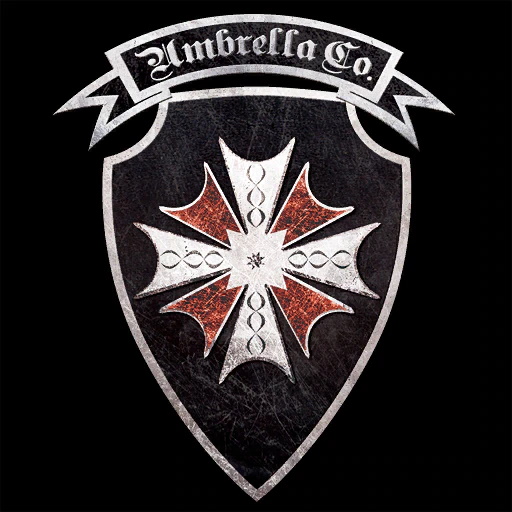 Nevertheless because of understandable public scrutiny over their resurrection, it was difficult to approve re-establishment if this ruling was not upheld. Blue Umbrella solved this problem in later years by forming a working relationship with the B.S.A.A. which led to the formation of the ‘Special Cases and Disposal Team’. Essentially this unit was made up exclusively of elite B.S.A.A. operatives armed with Blue Umbrella weapons and equipment.

Despite some uncertainty on both sides, the S.C.D.T led to a solid working relationship that was later turned into a major PR campaign to help solidify Blue Umbrella’s new, positive corporate image. However, despite the bulk of Blue Umbrella being made up of former Umbrella employees with genuinely honourable intentions, its top executives who originally shaped its re-establishment were secretly the former rulers of the ‘rival company’ and were operating under the late Albert Wesker’s mandate. Long before the S.C.D.T. came into existence, they created the Umbrella Corps; a secret military unit used for illegal purposes. This unit was comprised of elite operatives and given the very best weapons and equipment. Their remit was to head into biohazard quarantine zones across the world to steal data and do battle against other corporate mercenaries trying to profit from old Umbrella’s research results that were still available out in the wild.

They were overseen by a mysterious individual known only as ‘The Executive’. He ruled through fear and everyone within Umbrella was deathly afraid of him. He sent the Umbrella Corps on missions across the world where they gathered battle data, took part in simulations to further evolve CQBZ tactics, and completed objectives for various corporate sponsors. Their progress was monitored by various operators who reported progress directly back to The Executive, His motives behind the unit were as mysterious as he was, but he often made comments about Umbrella Corps being ‘’Nature’s way of culling the rubbish from the gene pool’ and stated that ‘CQBZ is the future of modern warfare.’ It is speculated the Umbrella Corps were being created as an elite army to eventually do battle against the B.S.A.A., who The Executive saw as their foremost obstacle in Blue Umbrella’s path to world domination. Operators have frequently suggested as much in mission debriefs, with statements such as: ’With this data and your skills, even the B.S.A.A. won’t stand a chance’ and ‘not even the B.S.A.A. will be able to stand up to us.’ A common theme throughout Umbrella Corps missions however is the mantra of ‘There’s no room in our organization for failures.’

The Umbrella Corps are decked out in standard military fatigues almost identical to their U.S.S. predecessors. Their logo is the same standard Blue Umbrella patch although in a somewhat sinister twist, the blue and white colours symbolising reformation and rehabilitation have been reverted back to the original red and white theme. The weapons are usually modified versions of existing firearms. But because of CQBZ, typical standard-issue firearms are short-range weapons such as PDWs and shotguns better suited to close range combat. CQBZ (Close Quarter Quarantined Battle Zone)” refers to “close proximity combat techniques under a viral environment.”

Since the original Umbrella’s collapse, bioterrorism occurred frequently in the world and the damaged zones and remains of Umbrella’s research facilities were forbidden to enter as quarantine zones, but “CQBZ” is a fighting style adapted to quarantine zones. It is an original fighting style advocated by The Executive. Interestingly the origins of CQBZ led back to the infamous U.S.S. operative HUNK and it is said that the CQBZ fighting system and accompanying tailored equipment for anti – ‘infected person’ combat evolved from his original ideas and methods.

BRAINER: – Also known as ‘Zombie Beil’ or ‘Cronos’, is a modified ice-axe devised to destroy the link between the cerebrum and spinal cord. Several variants exist, including an electro-charged model capable of conducting and superheating the blade for added effect.

TACTICAL SHIELD: – Also known as a ‘Bite Guard’, this is a tactical armoured attachment for the wearer’s arm and is able to deflect bullets. It also contains a sticky resin which is able to entrap zombies and prevent them getting closer when they try to bite and grab.

TERRAIN SPIKES: – Also known as ‘Zombie Climbing Irons’, these are tactical steel-toe capped combat boots with sharpened metal studs on the sole. These can be used to more effectively destroy the heads of fallen infectants and also for added purchase when climbing and scaling vertical surfaces.

ZOMBIE JAMMER: – A special device that emits electromagnetic radiation designed to disorientate nearby infectants. It has so far proven reliable against t-Virus zombies and Las Plagas. However, mutated specimens are able to resist the effects of this device. It also has no effect on E-Type Mutamycete infectants. It was originally designed to be worn on the arm of the operative but following further refinement is now worn on the back.

The exact founding date of the Umbrella Corps remains unknown and their mission history is also unclear due to their highly classified status. However, it is confirmed they predated the Special Cases and Disposal Teams and it is speculated that mercenaries hired for The Experiment, which documents back to at least 2011, saw any surviving members introduced into the unit. They were also globally active in 2014, 2015 and at their most prominent throughout 2016. They took part in a top- secret mission known only as ‘Operation Annihilation’ and it has been said by operators that the work Umbrella Corps are performing is ‘all for the greater good’, ‘the first step to advancing our goals’ and being ‘for the future of mankind.’ Because publicly Blue Umbrella were constantly walking a tightrope in convincing the world of their honourable intentions, use of the Umbrella Corps had to be extremely restricted so as to reduce the threat of exposure. Although Umbrella was initially reformed in 2007, this process was ongoing and would only be completed if they achieved their sanctioned goal of atoning for the original Umbrella Corp’s dark legacy.

If the Umbrella Corps and the darker side of Blue Umbrella was ever brought to light this would leave reestablishment dead in the water and the Chapter 11 reorganisation plan would be thrown out by the court and the PMC immediately dissolved. Additionally, their use may have been deliberately toned down following the rise and growth of the Special Cases and Disposal Team who were able to operate legally. Regardless, The Executive believes CQBZ to be the future of modern warfare and the Umbrella Corps are the world’s foremost experts. As CQBZ is specifically tailored for a biohazard environment, this presents worrying implications about The Executive’s plans for the world.