The Umbrella Security Service or U.S.S are an elite paramilitary group that operate directly under Umbrella HQ. They are usually involved in highly secretive and clandestine missions for the company which can include personnel extraction, B.O.W retrieval and information collation.

The units working in the U.S.S are highly skilled indivduals, many of whom are trained on Rockfort Island under the gaze of its commander, Alfred Ashford. 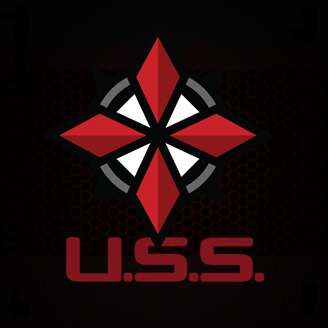 The exact date of the U.S.S.’s formation is unclear although the first recorded mission was in 1988 when two troops were used in the assassination of James Marcus.

With the opening of Rockfort Island, the U.S.S found their new home with new recruits being trained on the island to prepare them for various missions. Whilst stationed on Rockfort, recruits were trained in armed combat against B.O.Ws.

In July 1998 Delta Team of the U.S.S were dispatched as part of the Reclamation Project to the abandoned Management Training Facility and then later to the Ecliptic Express. Unknown to Albert Wesker and William Birkin the Delta Team were walking into a death trap. The Queen Leech transformed into a youthful James Marcus seeks revenge on Umbrella for his master’s death 10 years prior. With an army of leeches at her command, the Queen attacked both the Ecliptic Express and the Training Facility and in doing so the entirety of the Delta Team were wiped out with many people zombies in the process.

A few months later the U.S.S were called into action again, this time with the Alpha Team led by notorious leader, HUNK. After learning of William Birkin’s planned defection to the US Government with his near-complete G-Virus, Umbrella HQ send in the Alpha Team to recover the G-sample.

Birkin, having become extremely suspect of Umbrella’s intentions had hidden himself in the P4 Laboratory on the outskirts of Raccoon City. Infiltrating the laboratory using the sewers, HUNK leads Alpha Team into the lab. Despite the hostile approach the U.S.S initially ask Birkin to hand him a sample of the G-Virus. After refusing, the U.S.S open fire leaving the scientist for dead and taking a suitcase of both t and G-Virus samples.

The U.S.S swiftly exist the lab unaware that Birkin had been holding a sample in his hand the whole time. Close to death, Birkin injected himself and became his own creation.  This new monster, dubbed “G” systematically stalks the U.S.S soldiers back to the sewers and decimates them. Only HUNK survives the ambush and eventually escapes the city a week later.

This attack was a key contributor to what will be known as the Raccoon City Incident with the entire city succumbing to the effects of the t-Virus. It also enabled Umbrella to test out further B.O.Ws and during the incident further U.S.S squads were involved in many combat situations. One such deployment was led by Captain Rodriguez, who acting against orders, obtained the experimental Nyx B.O.W. It is unclear as to who he intended to sell the sample too, but due to the efforts of a number of survivors, his plan failed and he escaped the city minus his prized possession.

The last known mission of the U.S.S came in December 1998 following a tip off that the unit’s “home” on Rockfort Island had been infiltrated with spies from the Rival Company. To counter-act this, Alfred Ashford ordered HUNK and the U.S.S to transport a Tyrant from the Antarctica Terminal to Rockfort as a fail-safe.

It can be assumed that following Umbrella’s dissolution in 2003, the U.S.S was formally disbanded. However, the unit continued to be revered in certain circles and HUNK in particular for his combat training and abilities known as CQC. This devotion and ongoing need for other organisations to test out paramilitary capabilities against B.O.Ws directly led to the formation of the Umbrella Corps.