The Uroboros Virus was the master plan of Albert Wesker after he assumed Oswell Spencer’s mantle of becoming a god over humanity. Wesker was a born sociopath who harboured a life-long hatred of humanity, believing they were orchestrating their own self-destruction through sheer stupidity and were not worthy of living. Wesker believed the human race required judgement to sort the wheat from the chaff and Uroboros was designed specifically to single out those worthy of survival through superior genetics and DNA.

All the insignificant others would be killed by the virus. Uroboros was conceived with simplicity in mind, therefore dispensing with flaws of past viruses such as random mutations and multiple mutation cycles, streamlining everything down to one of two outcomes; adaption or rejection. 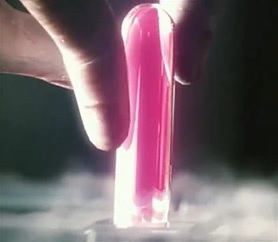 The adaptability factor of the virus was very precise and the mortality rate extremely high, even in its perfected state. Uroboros is an RNA retrovirus and variant of the original Progenitor. It was engineered flawlessly, undergoing several iterations before becoming almost perfect. Inherent weaknesses found in the G and t-Veronica viruses such as stability, mental degeneration and excessive mutation were eliminated.

Once the virus was administered to a live host, Uroboros would recognise and adapt to the subject’s DNA. During this time initial symptoms include sweating, disordered breathing, delirium and confusion. The virus fed into the subject’s genome and developed an external core resembling a pulsing, orange nacelle. It extracted internal nutrients from the host’s body to develop black viral cysts which fed on organic tissue. These snake-sized pustules began devouring the body from the inside out. If the subject had the required superior DNA, the pustules and the core would retract back into the body and be completely metabolised by the subject. Following this, the virus entered a period of dormancy as it reshaped the internal genetics and recognised and adapted to its host’s DNA. This process was ongoing until the virus was fully absorbed by the body, and if completed successfully, would bestow the host with superhuman speed, strength and regeneration abilities, drastically slowing the aging process and essentially rendering them immortal. One defining trait of a successfully adapted subject was a permanent change to the pigmentation of the eyes to a yellow-red colour and the pupils becoming vertical like a cat. However, during the process of adaption, Uroboros could still overcome and consume its host, meaning the subject had above average genetics but were still not superior enough to fully adapt to the virus. An example of this would be Uroboros Mkono who initially was able to part control and metabolise the black viral cysts for a short time until the virus eventually overloaded his body and completely consumed him in black tentacles.

It was also possible for successfully adapted subjects to overdose on Uroboros, such as Albert Wesker who punched his way into an entire missile containing the virus. Due to sudden exposure to such a large amount, Uroboros would constantly try to take control and this resulted in spasming of the body, extreme aggression and loss of reason. The body’s healing factor was also lost and any significant damage to flesh and tissue would see them be overcome by more black pustules. Critically the central orange nucleus would conform and transform with the subject’s heart. Although the subject remained in complete control of the pustule collective, taking further damage in this state caused more pustules to generate in the injured areas, even replacing entire body parts.

If Uroboros was injected into a host with an inferior genetic make-up, the virus ran rampant and the generated black cysts were completely out of control, growing rapidly and multiplying quickly. Unlike the yellow colour effect with vertical pupils, a rejected subject’s eyes would turn completely black. The pustules were quickly expelled from the body and assimilated organic matter from the nearby environment to fuel their growth. The host body self-reproduced through a continual cycle of destruction and regrowth, and indiscriminately attacked any living things around it. It grew further by enveloping nearby organisms one after the other. Living things that had been given the virus were included in these organisms. These viral cysts had primitive intelligence capable of detecting nearby organisms as well as capturing, hunting and breeding. Single viral cysts were not particularly long-lived and were easily destroyed, but a collection of cysts would aggressively surround any active living organisms. The organic core for the propagation of these cysts was a glowing orange nucleus that was also a fundamental weak point. The resulting creature would search for further prey to consume more organic matter and fuel its growth, living or dead. The Uroboros cells were capable of regenerating indefinitely which made these beings extremely resistant to conventional gunfire. These masses of Uroboros virus would merge together, further growing and expanding until they were too large to be destroyed. If the virus ever broke out of a contained facility its rate of organic propagation ensured it could spread over a large area very quickly.

Due to these characteristics, it was decided to handle live human subjects with extreme caution, and dosages were strictly controlled according to the subject’s body weight – 1 vial for body masses over 60kg 2/3 vials for body weights between 40 and 60kg, and so on. Even the slightest miscalculation of dosage would significantly increase the chances of the subject’s death. Since symptoms such as sweatiness, breathing difficulty, or confusion would occur. Even with the correct dosage, subjects were thought to be under significant physical burden. Because gunshots are not capable of delivering sufficient damage to fend off an attack, incineration at high temperatures was considered to be the most efficient method of repulsion. However, this was only true if the cyst mass was of sufficiently small size to be able to burn the entire mass – it became too difficult to incinerate organisms that have grown to extremely large masses. Thus, the Uroboros Project prepared a high-powered laser attack system called ‘Shango’ in preparation for a worst-case scenario. Uroboros was very heat sensitive, with even direct targeting from a simple heat source such as a powerful flashlight being enough to generate a reaction. When exposed to heat, a partial Uroboros adapter who retained some intelligence would look to seek out any means of cooling itself down such as a nearby water source.

When injected directly into a corpse, Uroboros generated an entirely different reaction. The virus made no attempt to bond with the inactive genetics of a dead host and as a result was incapable of developing the trademark large black cysts to consume the body. Instead the virus took root in the organic material and created a core. It then reorganised the organic material around that core and reanimated the corpse. The result was like an aggressive marionette. This line of research led to Uroboros based B.O.W.s to be created such as the Revenant and the Durga. The virus still absorbed organic matter, but at a much reduced rate due to the lack of cellular activity in its host. It effectively used the created nucleus to ‘jump-start’ viral activity in a dead host. Because creatures in this state were made up of dead cells with no capacity to divide and multiply, Uroboros lacked its original capacity in a live host of being able to infinitely replenish cells to aid durability and regeneration. This meant reanimated Uroboros infectants could be killed much quicker than their live counterparts. Propagation of the virus relied on the central core as a centre and if the core was destroyed, virus activity could not be maintained and the host would cease to function completely.

There have also been documented cases of secondary infection from Uroboros, though this is only possible if the host is exposed to very trace amounts of the virus. In 2008 a small arthropod was infected and it grew in size until it was bigger than a human adult. Although no trademark viral cysts emerged, it developed a very-hard epidermis. It remains the only creature of its kind.

When originally created, the first prototype strain of Uroboros derived from the Progenitor flower was much too poisonous. It could not be used in its natural state and resulted in a 100% mortality rate. Thankfully his study of Jill Valentine during her cryostasis revealed a constant build-up of powerful antibodies in her system thanks to the dormant t-Virus still in her body. These purified antibodies miraculously exposed the method to weaken Uroboros, allowing for more compatible hosts. The application of these antibodies allowed for the virus to be perfected. Despite this, Uroboros was still extremely potent and so far only Albert Wesker remains the only successfully adapted subject. Alex Wesker was also close as her body was able to supress growth and consummation of the Uroboros pustules. Although this reaction was somewhat suspected given her position as a Wesker Child with superior genetics, she failed to fully adapt thanks to her body being riddled by a terminal disease and also mutations and degeneration brought on by the effect of t-Phobos manifestation. TerraSave executive Neil Fisher also possessed genes boundlessly close to an adaptable individual. Despite becoming deformed, he was able to supress the propagation of viral cysts and maintain a near human form. He also maintained his intelligence but became motivated by a strong desire to kill and his reason was equally lost. It remains possible the complete consummation of Uroboros was kept in check thanks to Fisher being previously infected with a dormant strain of the t-Phobos virus, however this remains pure speculation and cannot be verified as he was killed shortly after exposure.

The name Uroboros is taken from the Greek myth of the snake devouring its own tail. It is a symbol of a perfect creature without beginning or end, and also represents ‘destruction and rebirth’ and ‘infinity’. It is also sometimes referred to as ‘dark blood.’