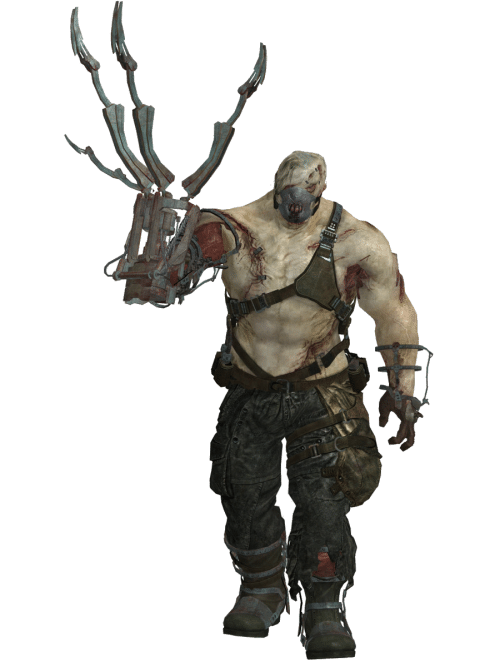 Ustanak was an exclusive project developed by Neo-Umbrella in 2011 to create the ultimate B.O.W. with distinct qualities similar to that of the original Nemesis T-Type ‘Pursuer’. Its name derives from the Serbian word for ‘rebellion’ and not only was this creature powerful enough to pulverise enemies and to survive explosions without flinching, it moved uncannily fast for its gigantic size and would hunt its target down relentlessly. The base organism was human and it took 322 failed test subjects before a viable subject was found. Previous candidates all died within a day of C-Virus injection, but the successful host was actually a Neo-Umbrella scientist and a willing volunteer for the experiment in honour of Carla Radames. He was also found to be highly compatible to the C-Virus and there were notable parallels in this process to compatible humans being turned into Tyrants with the t-Virus rather than standard zombies.

Within the first five days of viral application, the subject’s vitals remained stable although its right arm was lost in an accident during the experiment. Researchers tried to regrow it using the regenerative properties of the C-Virus, but this proved unsuccessful. Despite this setback, the scientists assured Carla Radames that the completed B.O.W. would develop certain abilities to compensate for this loss. Muscle booster and body strengthening surgeries were conducted and just one week later the Ustanak had developed a high level of physical strength and intellectual power that far exceeded that of a J’avo. In early combat experiments it chose many weapons depending on the target and assessed and chose the best tactics dependent on the situation. Following such impressive results, Carla Radames issued orders to her senior research team to develop specialised weapons exclusive for Ustanak’s use. These weapons came in the form of custom-made attachments to substitute for the loss of its right arm.

The Ustanak possessed impressive intelligence levels and to expand on the primary five senses, various additional human sensory components were surgically added. Its brain cells came from multiple human sources and the other human parts, including skin and hair, looked disproportionately small. It had numerous surgical scars visible and its face was a mis-match of skins, with the nose position, the jaw occlusion, and the ear positions all distorted. Its skin had a white texture, leading some to name the creature ‘white demon’. This was a creature created by madness and its face was not its own, but rather something created by combining the skin of captured humans. Even though it was a manufactured B.O.W., all the subject’s mental faculties as a human remained intact, giving him a capacity for cogent thought. This made Ustanak the perfect candidate for carrying out missions on its own. It developed a mother-son/master-slave relationship with Carla and would only follow her orders.

By December 2011 several custom-made weapons were in production, including a Vulcan, a shotgun and a drill for close quarters combat. But then Carla relayed additional orders requesting a special attachment be developed for the purpose of capturing and restraining a live subject. This was successfully completed and a human-sized cage was attached to its back with an arm attachment consisting of enlarged mechanical fingers to grab its target. Various additional mechanical attachments contained syringes that allowed Ustanak to extract bodily fluids from its captured prey.

To support its increased muscle bulk, cybernetic implants were constructed across the creature’s spinal cord and these plates were visible across its back. It was also incredibly quick and could outrun any human in optimal condition with ease. Like most creatures infected with the C-Virus, it was highly durable and could withstand massive levels of damage, including internal organ rupture and fire. Although evidence suggests the C-Virus had actually increased the subject’s intelligence, it lacked the regenerative properties of a J’avo and could not grow back lost limbs, though it could survive intense physical trauma.

Because of its deformed face and having only one eye visible, the Ustanak had a unique ability to help with its ocular shortcomings. Small creatures known as ‘Oko’ (Serbian for Bat), were released from an organ on the Ustanak’s back. Insect-like in appearance, their erratic flight patterns were more indicative of bats. The Oko searched for enemies by using its developed hearing and ultrasonic waves to compensate for the Ustanak’s weak visual performance. It shared its sensory organs with Ustanak and upon finding a target, informed it by flapping its wings and emitting a light at a level only Ustanak could detect. The mechanism behind this shared sensory perception remains unknown, but their ultrasonic waves cannot pass through walls and other barriers.

Ustanak was first deployed in Edonia in December 2012 where is successfully tracked Jake Muller and Sherry Birkin through the war-torn city and later a mountain and mine complex. It was used again in 2013 in Lanshiang and was given additional arm attachments including a hook-shot. When Carla Radames was eventually killed, the Ustanak became quiet and withdrawn, refusing to engage with anyone. All it would focus on was on the last orders she gave, which was to capture Jake and Sherry. It knew of Carla’s death which demonstrated another obvious display of increased intelligence over other B.O.W.s, and it was filled with intense anger and sadness. The Ustanak pursued Jake and Sherry throughout the undersea facility off the coast of Lanshiang until it was eventually eviscerated. Because of the various genetic manipulations, the Ustanak would not chrysallise upon death and be reborn as a Complete Mutation Species.