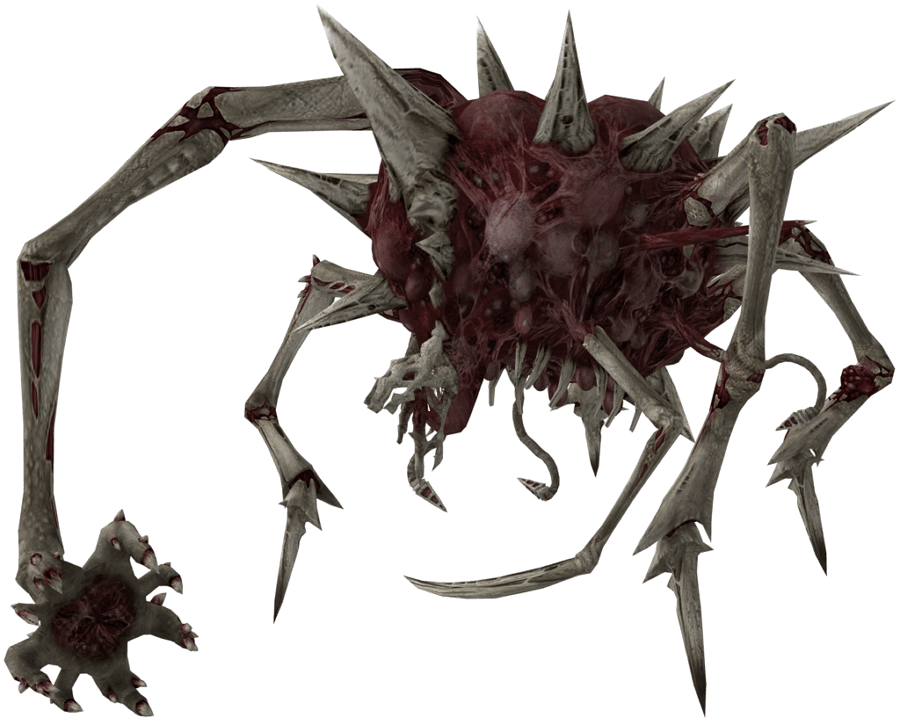 The V-Complex was created when Javier was absorbed by the Veronica Plant and joined with it. This bonding caused the plant to go out of control and it began absorbing surrounding organisms to make itself grow even larger. Like the Alexia-Pod, it was capable of producing offspring that were able to fly around and protect it. Its huge legs were also powerful and became weapons in themselves. There is a sac in its abdomen containing sporangium and when this explodes, spores are scattered and cause all the surrounding plants to mutate into Veronica Plants. If the V-Complex remains active, it’s believed that approximately 60% of the Amazon will be contaminated within 48 hours due to the birth of a “Veronica Ecosystem.” It’s thought that a Veronica Ecosystem would cause the worst biohazard by absorbing surrounding creatures without limits and continuing to spread relentlessly.

FIRST FORM V-COMPLEX: – The figure in which the Veronica Plant fused with Javier and surrounding organisms and became gigantic. Javier fit into the part believed to be its head and controlled the virus’ power while retaining his sense of self. Through fusing with the Veronica Plant, Javier turned himself into a monster which could absorb everything around into its body. Under this form, Javier could control the power of the virus to slaughter his enemies, and his head was covered by a hard mutated crust.

SECOND FORM V-COMPLEX: – The state, with the hind leg destroyed, from which Javier became enraged and further released t-Veronica’s power. The virus began to go out of control and absorbed the body of Javier settled in its head, and acted as a monster out of even Javier’s control. After one of the legs was destroyed, an enraged Javier further unleashed the virus’ power. Because the virus was out of control, Javier’s head was exposed from the body of the V-Complex,and he made it become an uncontrollable and raging monster.

V-COMPLEX FRONT LEG: – A part of the V-Complex that attacked Leon and the others in the warehouse of Javier’s private residence. Specifically, it’s the tip of a forelimb and you can imagine the body’s tremendous size. It brandishes tentacles and catches creatures which it then attempts to absorb into its own body, and can also spit out a toxic solution from the tips of its tentacles.

The Veronica Plant was a result of secondary experimental infection at the time Manuela’s initial treatment with t-Veronica began. It was far stronger than any t-Virus based B.O.W. and had a much lower operating cost. It was cultivated in secret in the botanical garden inside Javier’s mansion estate and thrived in the hot and humid temperatures. It had many similar qualities to the Alexia-Pod although it was not under anybody’s control because there was no other t-Veronica carrier to form a symbiotic relationship with. By dispersing its spores, it had the power to transform neighbouring vegetation into Veronica Plants as well. The speed at which they could spread was astounding.

Presumably, in only 48 hours, it could invade 60% of the Amazon. Practically speaking, this extremely dangerous organism could destroy a continent’s entire ecological system within a matter of days. Once it started to spread its spores, there was practically no effective method of containment. Even Javier considered this B.O.W. to be his trump card and only to be used as a last resort, and kept it under lock and key. In 2002 Javier allowed himself to be consumed by the plant here they merged and became the V Complex. Unlike the t-Virus or G-Virus, the true fear of t-Veronica was in evolving and propagating whilst absorbing surrounding ecosystems. Since its diffusion speed was fast and effective, there were precious few countermeasures available meaning Veronica was potentially the most dangerous virus. The extreme cold and isolation in the Antarctic helped control Veronica’s proliferation capacity to a certain extent, but the high temperatures and humidity in South America rendered it harder to control in Javier’s case, especially with so many thriving eco-systems nearby.