Vincent Goldman was a col and calculating individual and Director of the Umbrella owned location – Sheena Island. He expressed a great desire to climb the corporate ladder and took all steps he deemed necessary to achieve these goals.

His main responsibility was the management of Sheena Island – an Umbrella owned facility in Europe. Sheena Island mass produced the Tyrant T-103 model which in turn was shipped to facilities across the world for further B.O.W development. 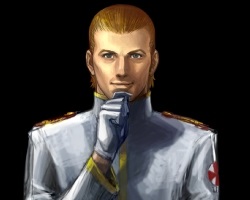 Goldman’s role within Umbrella Europe prior to 1998 is unclear, however following the unexpected death of Sheena Island’s director, Goldman was promoted to that role in August 1998. He relocated to the island, Presumably with his mother and immediately began to familiarise himself with the local leaders and his employees within Umbrella including the Klein family.

Goldman’s main role was to oversee the management of the mass-produced T-103 model. This Tyrant had been perfected following the combat data of the T-002 model that was unleashed during the “Mansion incident” in July 1998. With the battle improvements documented, soon Sheena Island was producing large quantities of the creature to be deployed to Umbrella labs as soon as possible. A contingent of 6 Tyrant T-103’s would be sent to Raccoon City in September 1998 to obtain a sample of the G-Virus that was being shielded by its creator Dr. William Birkin.

The labs on Sheena Island also oversaw the development of a new prototype Tyrant dubbed Hypnos. Goldman took great interest in this project and formed an attachment to the head researcher’s son, Lott Klein. The hypnos project required the production of a chemical called beta heterononserotonin – produced in the pituitary gland when under extremely stress. It was discovered that teenagers naturally produced more of this chemical and as such Goldman systematically organised the capture of hundreds of teenagers from all around the world. They would be brought to the island and imprisoned before the cranial extraction of the chemical would take place – with no anesthetic.

All this was to help produce the Hypnos T- Tyrant – a smaller, but more ferocious Tyrant designed at infiltration, but able to adapt if the situation turned hostile.  The chemical may have also been used to help create the T-103 Tyrant model too.

Regardless, Goldman saw these humans as just test subjects but was sadistic enough to indulge them before their termination. Many were allowed to socialise with the local population including Lott before being sent to the Paradise Prison.

In October 1998 a group of prisoners escaped their confines attempting to flee the island. Goldman systematically hunted down the frightened prisoner’s shooting them all personally. He then reported to the Prison Chief that the murders were to be marked formally as mass suicide.

This ruthless streak quickly caused Goldman to acquire enemies on the island. Many of the city leaders were opposed the commander’s methods and sought to undermine him. They did not believe Umbrella HQ would have approved of his approach and tried to document incriminating evidence. Additionally, a spy called Ark Thompson had arrived on the island and was asking questions to locals pretending to be him to get answers. Fearing betrayal and after Lott Klein had confirmed the presence of Ark on the island,  Goldman purposely leaked the T-Virus throughout the city. How he did this is unknown.

Following the leak, Vincent ambushed Ark in his office. Vincent had planned to keep free of the monsters now overtaking the city and escape claiming their had been an accident. Following the destruction of Raccoon City, such a cover story was plausible, but as a survivor, he expected a career jump as a result. Ark meanwhile had other ideas and managed to get to Goldman’s helicopter first. With his plans nearly ruined, Vincent grabbed onto the helicopter landing gear before shooting at it whilst in mid air. In the confusion, the helicopter crashed back on the city streets. Goldman meanwhile had fallen from a great height and was knocked out.

Confused and suffering from amnesia, Ark emerged from the wreckage unaware of who he was. He quickly stumbled across Goldman unconscious body noting the dog tags of Ark that he had grabbed only moments earlier. Despite this fall, Goldman may not have died at this point. Unconfirmed reports suggest that Goldman returned to the laboratories where he would confront Ark Thompson once and for all. This however was in vein as he was then impaled by the Hypnos T-Type as he spoke.