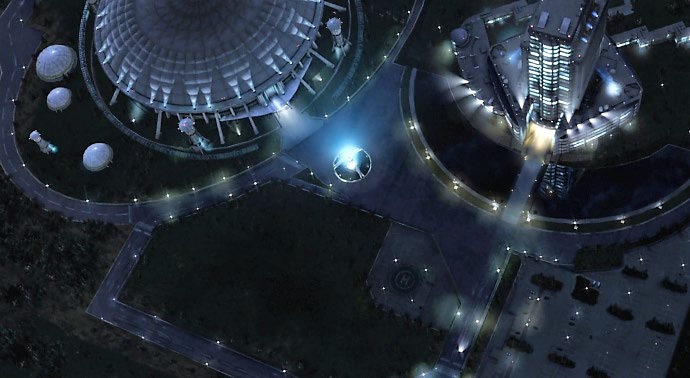 Construction of this multi-million dollar facility began in 2002 and took three years to complete. The plans were controversial to the residents of Harvardville with many still harbouring a deep mistrust of large pharmaceutical firms following the Raccoon City tragedy and what became of Umbrella Corporation. But WilPharma were able to push the move through thanks to the political might of Ron Davis who had ties to the White House and was a major company stockholder.

The new headquarters was located in a picturesque mountainous region some distance away from the town’s residential areas. The complex housed office buildings as well as an expansive research facility. A card key or master code was needed to access the outer car parking area. There was also interior staff parking and helicopter landing pads. The main research facility was split into two sections; the research block and the air dome. The air dome supported its circular roof by using fans to balance the difference between the interior and exterior air pressure. At the centre of the dome was a large garden meant for the relaxation of the researchers, and all the labs were set facing this garden which was managed by an automated sprinkler system. A narrow central elevator extended from the centre of the garden to the Air Dome’s roof, with hallways branching outward on each floor to convey the researchers to their laboratories and offices. The main building was separated into five separate parts, with the viral research labs divided among four levels, with ascending levels designated a number indicating the danger level for that particular area according to the microbes being handled in each section. Level 0 was the safest, and Level 4 was the most hazardous. Each level was then split into six individual floors. Level 0 was the safest area and remains open to most personnel. It contained offices and meeting rooms. Floors 1 and 2 were research centres, Floor 3 were offices, Floor 4 meeting rooms, and Floors 5 and 6 laboratories. Level 0 was also where Frederic Downing’s office was located on the third floor. His office overlooked the beautiful inner botanical garden.

The air dome also had four sub-basement levels, and levels B-2 and B-4 contained connecting underground tunnels that led back to the adjacent research block. The research block was made up of 22 floors. A majority were used for administration purposes and at the top of the building, floors 19-20 were Conference Rooms, Floor 21 the Center Control Room and Floor 22 was the President’s Office. From the Center Control Room, the rest of the facility including the air dome could be monitored and controlled. The unique design of the air dome was constructed with safety in mind, and allowed for the quick isolation of a biohazard outbreak on the premises. If a biohazard was detected, the entire area would be automatically sprayed with anhydrous ethanol which was used to re-sterilise the building. Precisely five minutes later the contaminated sections were incinerated to vaporise any infectious agents. In a sequential order, the garden area would unlock and drop down into a deep underground pit 300 metres below.

During the 2005 outbreak with the G-Curtis creature, the inner-garden was the first level to fall, closely followed by Level 4 and so on in sequential order until the entire facility and the biohazard itself was safely sealed up underground. When WilPharma were later bought out by Tricell Inc, it was suggested this facility was re-purposed and reopened under the Tricell banner.

Level 2: Medium risk for individual specimens; minor risk to society. Will cause mild illness to humans and animals but will not result in serious hazards for society, livestock and the environment. Effective cures and prevention methods exit and widespread is unlikely.

Level 3: High risk for individual specimens and low risk level for society. Will cause serious illness to humans but its widespread is not likely. Highly Pathogenic Avian Influenza, HIV, Anthrax, Bubonic Plague.