Yoko Suzuki was a university student and was very knowledgeable with computers. She had a quiet and reserved personality, but the strength of her inquisitive mind emerged with a toughness that always surprised. But once she got hung up on something, she was a bit slow on the uptake with other things. She also had a hidden past and was once an employee of Umbrella. She worked as a computer technician in William Birkin’s lab and in 1996 volunteered for a top-secret experiment run by Greg Mueller, an Umbrella scientist she knew from her time at the university. Yoko donated base cells from her body which were essential to completing the latest iteration of the t-Virus at that time. But something went wrong with the experiment and she had a very bad reaction.

Greg Mueller performed a procedure on her brain that wiped her memory of the entire event. She was monitored closely following this experience and whilst in the lab, worked on B6 level, often leaving behind her lab coat and glasses in the break room. She demonstrated no recollection of the t-Virus experiments. 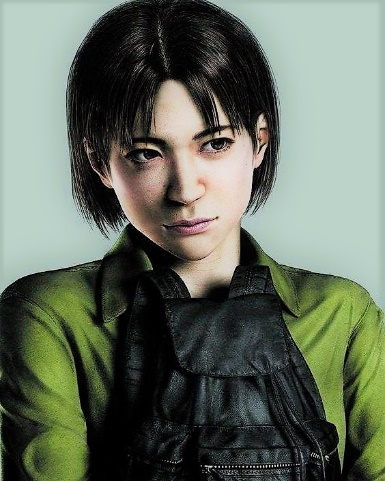 In her spare time she was an avid reader of books and her latest titles included ‘From Sea to Land’; a deep analysis of the evolution of animals and the transition from ocean to land, ‘Creature Evolution’; about the evolution of mankind, and ‘Seize your Tomorrow!’, a Japanese manga. She was also into keep-fit and had many sports outfit from her parents’ home country of Japan. She was single and lived alone, though she later developed a big crush on R.P.D. officer Kevin Ryman.

The night the Raccoon outbreak got out of control, Yoko was having a troubled time. She burst into J’s Bar and went straight to the bathroom to chop off her hair and alter her appearance to avoid being recognised. Days later she led a group of survivors to William Birkin’s underground lab. There she met surviving researcher, Monica, who snatched Yoko’s ID tag in a bid to escape the lab with a stolen G-embryo sample. There were other dying staff members dotted around the lab who had been attacked by the Hunters running loose. Some of them recognised Yoko and helped her by providing weapons and ammunition. Much later in the outbreak, she accompanied the survivors to Raccoon University and came across the researcher who wiped her memory two years earlier, Greg Mueller. Greg taunted Yoko about what happened but was killed by Nikolai Zinoviev before he could fully reveal the truth. But this encounter was the catalyst for her suppressed memories slowly coming back to her. Eventually, Yoko successfully created the Daylight vaccine sample and faced down the Thanatos Tyrant. This was only minutes before the Thermobaric missile detonated in the heart of the city. Alter signalling a rescue helicopter, she managed to escape Raccoon City only minutes before it was wiped out.

Following the incident, Yoko testified against Umbrella in the much publicised ‘Raccoon Trials’.