Yuki Mayu was a famous gravure idol from Japan and extremely beautiful. But despite her status, she was very down to earth, friendly and always treated those around her as equal. She first met Takeru Tominaga on a photoshoot in Japan in the middle of winter. Takeru earned the wrath of his boss for booking an outdoor bikini shoot in such cold weather after he’d realised the studio was double booked. But far from being a diva, Mayu did the shoot regardless. She was a big name in Japan and the whole country was behind her when she was entered into the 2014 edition of Idol Survival; a reality TV show where swimwear models competed in a series of survival games across a deserted island.

But despite her home grown success, Mayu’s career had been dogged with vicious, unfounded rumours, including how she had allegedly slept with a producer from her sponsor as part of a lucrative business deal. Mayu learnt how to deal with such stories but that made it hard for her to put any real trust in men. Working in the gravure industry she was acutely aware she was never seen for anything more than her physical appearance and people were only ever kind on the surface, leading to lingering feelings of self-doubt. 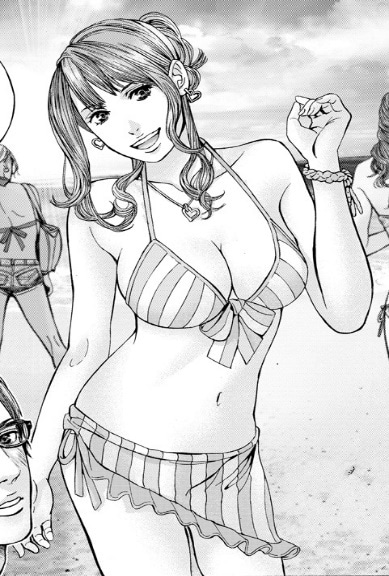 Idol Survival was filming on the picturesque isle of Sonido de Tortuga in the Caribbean Sea and Mayu found the initial stages tough going when the reigning champion, Kylie, used dirty tactics to steal her pass for the second round. But progress was abruptly halted when Mayu and her cameraman Tominaga came face to face with Subject 001193 – a leftover B.O.W. from a secret project run by former researchers of the original Umbrella Corporation. Mayu was petrified and stuck close to Tominaga, even promising herself to him if he could help her survive. When they did manage to escape, Mayu gave Tominaga her hair clip so he could sweep back his long hair in the heat, a gesture Tominaga mistook as a gift one lover would give to another.

Eventually the whole island became a biohazard as a majority of the Idol Survival cast and crew were infected by the Kodoku virus and became flesh-eating zombies. Mayu was one of a handful of survivors that discovered a previously unknown Umbrella facility hidden beneath the ruins of an abandoned U.S. Military base. Exploring inside they were confronted by the horrifying truth of the Kodoku Plan and Umbrella’s hidden legacy. Mayu was saved by TerraSave member Inez Diaco from a Hunter, and then witnessed her friend Laura Bierce become a zombie. She was also captured by sleeper agent Zǐlì; a spy working for Shen-Ya Pharmaceuticals. But throughout her ordeal, Mayu found herself growing closer to Tominaga and felt she could trust him in a way she usually struggled to trust a man. Eventually he asked her out on a date and she accepted. Mayu later proved her own bravery by saving Tominaga’s life from Zǐlì’s mutated form after she had injected herself with the completed Kodoku Virus. In the end, Mayu was one of four survivors evacuated by the B.S.A.A. She decided Tominaga looked much cuter without his glasses and following the incident on Sonido de Tortuga, they both returned to Japan and started a relationship, both soon becoming major stars in their homeland.