Zǐlì was an alias of a master spy working in the same shadowy circles as the legendary Ada Wong. A majority of her background is a complete mystery although she operated as an independent contractor available for hire by various clandestine organisations.

She was of oriental descent and very beautiful with a slim, athletic body. But these looks were deceiving and masked a cold-blooded killer well trained in expert hand to hand combat and stealth assassination techniques. She was also adept at interrogation and confessed a love of torturing people. She preferred to use her hands rather than weapons and wore a gold bracelet on her right wrist capable of shooting out a high-tensile metallic wire used to grapple onto surfaces or as a method of detaining, strangling and garrotting people. She also wore a large, circular earring with a diamond on her left ear which acted as a secret communications device to relay progress reports and receive mission updates.

In 2014, Zǐlì was hired by Chinese conglomerate Shen-Ya Pharmaceuticals to investigate Sonido de Tortuga Island in the Caribbean Sea to confirm the location of a previously unknown Umbrella Corporation research facility and secure whatever secrets lay inside. She was partnered alongside another agent named Mike Seaman who had a separate objective to secure a hidden B.O.W. on the island. 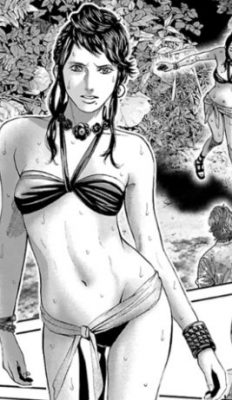 As her cover, Zǐlì posed as a struggling actress and a contestant on reality TV show ‘Idol Survival’. Thanks to Mike who was able to use his contacts to secure a producer’s position on the show, Idol Survival gained permission from the local government to film on Sonido de Tortuga Island and Zǐlì was entered as one of the contestants.

Although they were working together, Mike had no real idea about Zǐlì’s skills and likewise she detested working for him, mainly because he prayed upon her looks and made attempts to seduce her. Early on, Mike and Zǐlì were forced to speed up their mission parameters when the White Castle; the ship that brought the Idol Survival production team to the island, was sabotaged by a mysterious creature known only as ‘Subject 001193’. Mike led Zǐlì to the military base ruins where they discovered the Schraube Damon B.O.W. in slumber. Mike tried to reactivate the creature but found he could not control it and was brutally killed. Zǐlì managed to make a quick escape and later teamed up with several survivors when a full-scale biohazard broke out across the island. Zǐlì remained undercover until the survivors located the hidden Umbrella facility beneath the old ruins. Once inside she contacted a Shen-Ya strike team who were on standby ready to launch an attack. Inside the base, Zǐlì met Dirk Miller, a surviving Umbrella researcher who had been using the island as a ‘Kodoku Pot’ to create a perfect virus based on the template of Charles Darwin’s ‘Survival of the Fittest’ doctrine.

Using her skills, Zǐlì slipped away unnoticed from the others and infiltrated Miller’s lab, getting the drop on him and taking him hostage. She needed him alive so he could bypass the retinal scanner security system and activate the final phase of the Kodoku Plan. Once she had no further use for him, Zǐlì callously snapped his neck. She later recovered the final virus and boasted even one drop could be worth millions of dollars. She expertly defeated Claire Redfield in hand to hand combat and left her badly injured. She also knocked Takeru Tominaga and the rest of his party unconscious and planned to torture them all for information. But in a rare show of arrogance, the usually calm and composed Zǐlì let her guard down for just a moment too long and allowed a zombiefied Laura Bierce to attack her.

Both went plummeting down into a deep pit and Zǐlì was fatally injured. Not wanting to die, Zǐlì injected herself with the final virus and mutated into a large, spider-like creature. She appeared on Emerald Beach in her mutated form and completely decimated the Shen-Ya Special Forces, but she was ultimately defeated by Claire, Tominaga and assistance from the B.S.A.A.