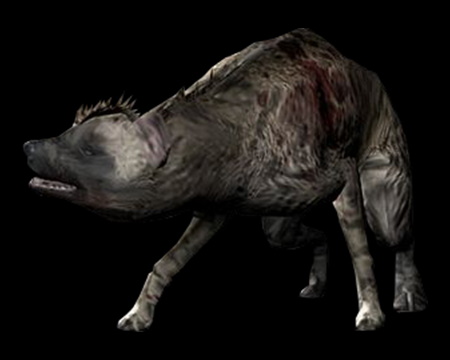 The Hyenas were pack animals kept as an attraction at Raccoon Zoo and during the outbreak in September 1998 they became secondarily exposed to the t-Virus. Although no noticeable changes in size were observed, they became extremely aggressive and very excitable. Much like a zombie dog or Cerberus, the virus necrotised the brain to the extent that it no longer had any sense of fear and its tolerance reaction to pain was heightened.

They were fast and agile creatures and liked to hunt in packs of two, pursuing a potential food source relentlessly due to the extreme feeling of hunger brought on by the virus. There were minimal physical changes in the infected creatures with only small amounts of skin and tissue degradation present, which was unusual for a mammal. No enhancement of muscle tissue was observed and therefore the Hyena’s retained their naturally frail form, meaning they were easy to take down with even small-arms fire.